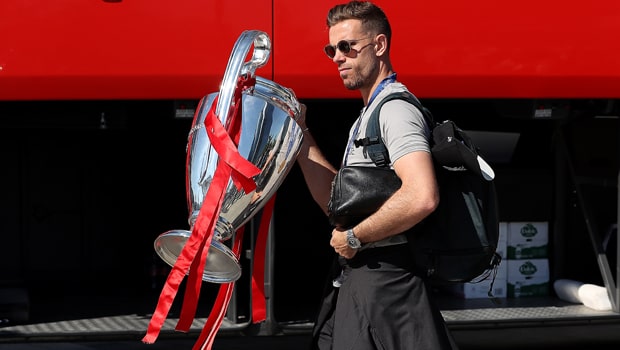 As England prepare to face Italy and Germany in the UEFA Nations League this week, Liverpool skipper Jordan Henderson has been called up to the Three Lions squad.

Henderson has not featured in the last three matches played by Liverpool after he sustained an injury in late August. The 32-year-old had a hamstring problem, making Gareth Southgate leave him out of the initial squad.

However, another injury problem with Manchester City midfielder Kalvin Phillips meant that Henderson would replace him after recovering.
Henderson hasn’t played since he featured in Liverpool’s 2-1 win over Newcastle United in the Premier League on August 31.

The 69-cap England midfielder will hope to add to it on Thursday when England faces Italy in the UEFA Nations League at the San Siro before they face Germany on Monday.

He will be joining his Liverpool teammate Trent Alexander-Arnold in the squad, with Brentford’s Ivan Toney getting his debut call up to the Three Lions squad.

Others include Arsenal forward Bukayo Saka and teammate Aaron Ramsdale, Chelsea’s Raheem Sterling, Ben Chilwell, Reece James, and the duo of Fikayo Tomori and Tammy Abraham in Italy with AC Milan and AS Roma, respectively.

Liverpool has had a difficult start to the season, having won just two of their six games in league with three draws and a win.
Jurgen Klopp’s side has also managed an enduring start to the UEFA Champions League, where they have won one and lost another.
Their opener against Napoli in Italy was a 4-1 bashing before their 2-1 victory over Ajax in their second game.

Meanwhile, Liverpool will return after the international break with a game against Brighton on October 1.

That will be followed by a UEFA Champions League tie against Rangers before facing current table toppers Arsenal.