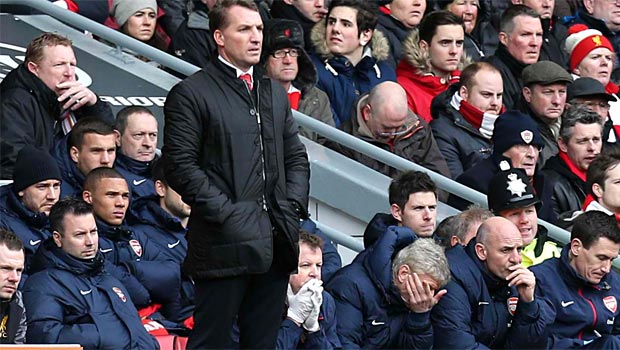 Liverpool boss Brendan Rodgers says it is crucial the Reds qualify for the Champions League this season if they are to sign top-class players and move on to the next level.

Liverpool are in with a great chance of returning to Europe’s elite competition as they currently occupy the final Champions League spot and sit three points ahead of Tottenham, who are in fifth.

Rodgers may have convinced Luis Suarez to stay but he is aware that he needs to add more players like him to the squad if they are to challenge for the title again, and Champions League qualification would help.

It has been a frustrating time for Rodgers on the transfer front ever since he took over at Anfield and he’s missed out on a number of top targets, who have moved to club who can offer Champions League.

“I think it’s vitally important [we qualify]. For us to go to that next level that’s where we need to be,” Rodgers revealed.

“I took over the team in eighth and that’s what we have been building towards over the last 18 months.

“If we can get into the elite competition, it attracts a different type of player as well. I think it’s very important and hopefully it will be this year.”

Following some fine performances in the Premier League season, in particular the 5-1 drubbing of Arsenal recently, Rodgers says they have proven they can compete with the best.

“I would have confidence in saying that we are at Champions League level. Our performances and results have shown that,” he added.

“I think we have shown in our performance level that we are as good as any of the English sides in the Champions League this season.”