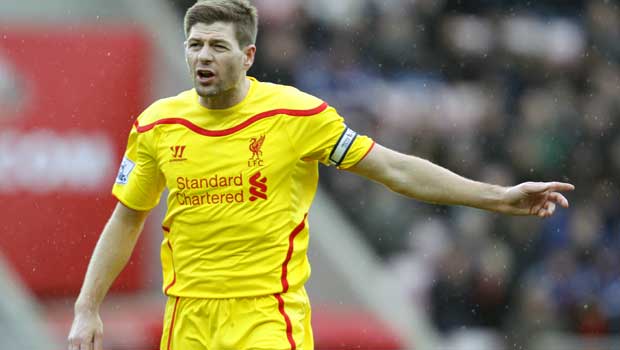 Liverpool are open to the prospect of club legend Steven Gerrard returning to Anfield on loan next season.

The talismanic midfielder confirmed earlier this month that he would leave the Reds at the end of the season when his contract ends to move to Major League Soccer outfit Los Angeles Galaxy.

Gerrard will end a 25-year association with Liverpool when he moves to LA in the summer but Liverpool chief executive Ian Ayre insists there is a chance he could return as a player on a loan deal next winter, when the MLS season comes to an end.

“I’ve said openly to Steven and his representatives, as have Brendan and the owners, that we see Steven as part of the family,” he told Liverpool radio station CityTalk.

“The fact that he’s leaving at the end of the season doesn’t mean it’s the last we’ll see of him at Liverpool.

“What that means, the details aren’t known yet, but we will keep a regular dialogue with him and I hope we will see him here again in the long term.”

Ayre also revealed the club had already discussed the possibility of a future loan deal with Gerrard.

When asked if that meant Gerrard could make a return on loan next term, Ayre added: “It’s conceivable. It happens a lot in MLS, and it’s something we talked to Steven and his representatives about.

“You can’t have someone who has so much of the club’s DNA in them and just expect that it will go away.”

Liverpool travel to Aston Villa on Saturday, with Gerrard again exepected to operate in an attacking midfield role, and they are 1.87 to take all three points, or 7.50 to win 2-0 at Villa Park.