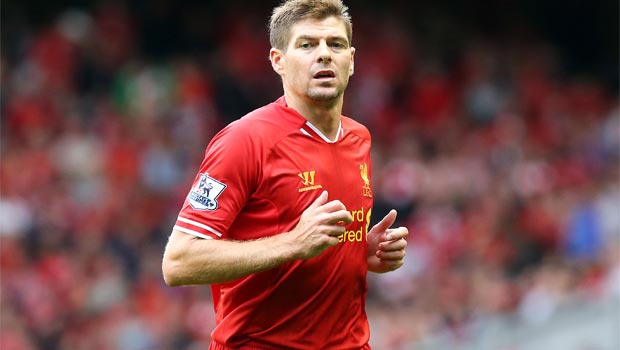 Steven Gerrard has hinted he believes Liverpool are firmly in the Premier League title race this season even though manager Brendan Rodgers has played down their chances of glory.

Liverpool have impressed under the leadership of Rodgers this season and, following the 5-1 demolition of Arsenal, who were leading the way going into the game, it has been suggested the Reds could still finish as top dogs this season.

However, Rodgers said after the game that qualifying for the Champions League was still the aim and the title would be won by either Manchester City, Arsenal or Chelsea.

City counterpart Manuel Pellegrini disagreed and said Liverpool were still in with a shout, and even though Gerrard did not say as much, he clearly agrees with the Chilean and not his own manager.

“According to Brendan, we are not (in the title race),” he said. “Ask the manager (why not). Listen, he said we are not, so we are all behind Brendan.

“We do what he says and he says we are not in the title race, so we carry on pushing for the top four and see where it takes us.”

Liverpool are just six points behind new leaders Chelsea and with so many points still to play for they are clearly in with a shout but Rodgers is keen to take the pressure of his players by insisting they are not.

Liverpool are 13.00 to win the title, with Chelsea the new 2.15 favourites, following their 3-0 win over Newcastle at the weekend.

Next up for Liverpool is a clash with Fulham in midweek and Gerrard says they cannot afford to be complacent going into the clash following their heroics at the weekend.