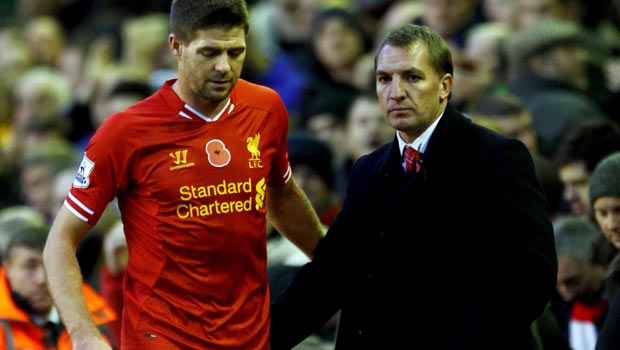 Steven Gerrard is walking a disciplinary tightrope as the Liverpool midfielder is just one more booking away from a two-game suspension – but boss Brendan Rodgers has backed his skipper to avoid picking up a potentially damaging ban.

Gerrard has been as influential as ever in a slightly deeper role in recent weeks as the Reds have emerged as genuine Premier League title contenders and everyone at the club will be hoping he is available for the full run-in.

If the 33-year-old is booked in the next four games against Sunderland, Tottenham, West Ham or Manchester City he will receive an automatic two-game suspension before the cut-off point of April 13.

With every game now important as Liverpool aim to keep up with Chelsea and Manchester City at the top of the table, Rodgers knows it is vital he has his skipper available and has backed him to avoid another booking.

“We just have to cope with the situation,” he said. “I have spoken to him about it and we just have to be that extra bit careful.”

The England star has been booked in his last two games against Manchester United and Cardiff on Saturday in the 6-3 win, but Rodgers insists Gerrard was unlucky on both occasions to be shown yellow.

“I think he has been very unlucky. His last two bookings have been unlucky. The one against Manchester United should never have been a booking,” he added.

“He won a header that was very difficult to win and he was unfortunate against Cardiff at the weekend because he committed a foul which also should not have been a booking.

“We didn’t help him because we gave away the ball so cheaply.

“He has been unfortunate. It’s a role he can play and he will find a way, I’m sure. He just has to be a bit more cautious but he is clever enough to get through that.”

Liverpool are short-price favourites (1.16) to see off struggling Sunderland (10.96) at Anfield on Wednesday, while the draw is on offer at 8.57.