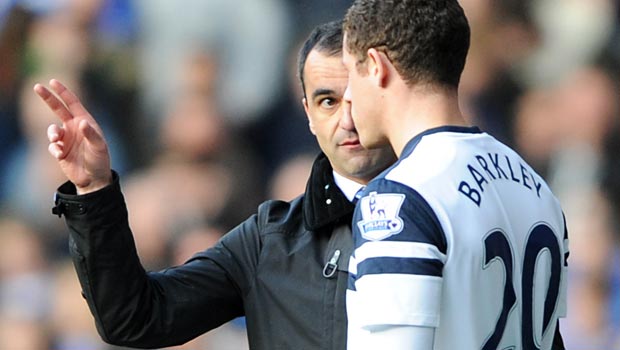 Barkley has emerged as a genuine candidate to be in Roy Hodgson’s 23-man party for Brazil after performing impressively in the Premier League for the Blues this season under Martinez.

Many believe he is destined to be an England regular of the future and he has already earned three caps for his country after being given a chance by Hodgson.

Martinez says his development needs to be looked at closely over the next few years but he is in no doubt that the youngster can shine for the Three Lions in Brazil if he is called upon.

“Ross has had such a demanding season, the most demanding in his professional career, and now he has come back really strongly for the final third of the season,” the Spaniard said.

“What is important for us is to see Ross developing into an incredible footballer and the national team will have the opportunity to use his abilities.

“When that is going to happen is down to the England manager.”

Martinez added: “He is ready to help if he is needed in the England set-up but we have real trust in the England manager to make the decisions he needs to make depending on what he needs in the squad.

“It will be something which wouldn’t faze him that’s for sure.”

Barkley has been compared to Paul Gascoigne by some pundits and Martinez is sure he is an outstanding talent, even though he admits the midfielder still has some way to go in his development.

He said: “Ross is enjoying every day’s work and is developing into a fine footballer, potentially one of the best English talents we’ve seen for a long time but he is not the finished article.

“If he is going to be involved in the England set-up as he has been recently that will be a terrific experience and probably from the psychological point of view he will learn more than any other aspect.”

England are ranked as outsiders at 30.00 to triumph overall in Brazil this summer, the hosts are the 3.60 favourites, followed by Argentina at 5.50, Germany are on offer at 6.00 and reigning champions Spain are available at 8.00.