Posted by OLADIPUPO MOJEED on September 23, 2021 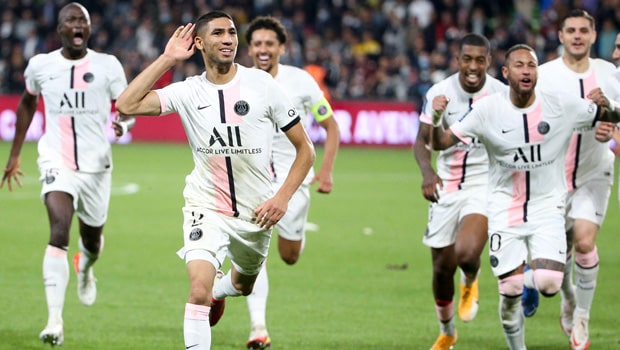 Paris Saint-Germain have continued their perfect start this season with another 2-1 win away at Metz.

They didn’t get an easy win this time despite Metz finishing the game with a man down, after Dylan Bronn was sent off injury time after receiving two yellow cards.

PSG took control of the game from the start in a 4-4-2 diamond formation as Neymar and Kylian Mbappe led the attack in the absence of Lionel Messi.

They made their dominance count as they went ahead through Achraf Hakimi. The defender right-footed shot from the right side of the box to open the goal record.

Metz restored parity in the 39th minute through Kiki Kouyate’s header. He nodded in the ball from the center of the box to the bottom left corner cross delivered by Lamine Gueye following a corner.

The hosts almost secured a vital point against the former champions after holding on from several attacks by the Paris front line that later see Angel Di Maria in action. Hakimi’s late strike dealt them a blow. The Morrocan defender scored with his left foot from the center of the box to the bottom left corner from an assist by Neymar.

This will still make Mauricio Pochettino happy as they maintain their 100 percent record in the top flight. It was a deserving win from a team that had 74 percent of possession and 15 shots, out of which five were on target.

In the seven games played in the league, PSG has scored 20 goals and conceded seven. Thus, they have a goal advantage of 13.

They are followed on the log by Marseille with 14 and, surprisingly, Angers with 13 points.

Lens, which recorded a defeat against Starssbourg on Day 7, shared the 4th spot with Lorient as both teams stay on 12 points.