Monaco coach Moreno proud of his players despite defeat

Posted by OLADIPUPO MOJEED on February 4, 2020 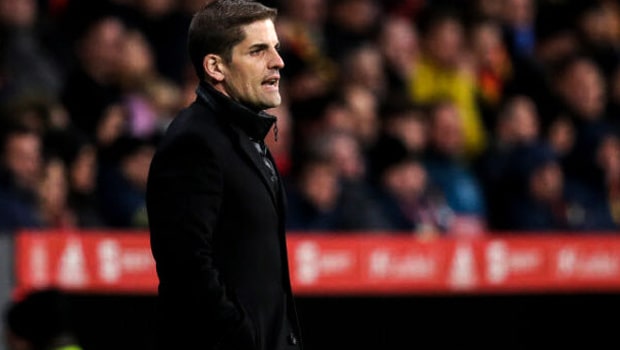 AS Monaco coach, Robert Moreno has lauded his players, saying he was “proud” of their display.

The former Ligue 1 champions were defeated 3-1 by Nîmes Olympique on Saturday in a match that finished with two Monaco players receiving the marching orders.

The former Spain coach, who is still on the lookout for his first Ligue 1 Conforama win, said it is difficult to talk about a game his team played for an hour with two men down.

While noting that chances created for Wissam Ben Yedder would have got the game back to 2-2 in the second half, he still praised his lads for their professionalism.

In the game, Monaco took the lead at the Stade des Costières through top scorer Ben Yedder. Florian Miguel restored parity for the hosts before Tiémoué Bakayoko was given the marching order on the half-hour mark for a foul on Romain Philippoteaux.  Gelson Martins later followed over his clash with the referee.

With two men superiority, the host took advantage, and Philippoteaux and Pablo Martinez’s goals gave them a 3-1 win.

Speaking on the behaviour of Martins, which he said he didn’t understand, the manager said he is yet to talk to the Portuguese winger after the game.

In the present season, Monaco has had nine red cards as they continue to languish in the bottom half of the table. They will be welcoming Angers SCO in their midweek clash.

Kylian Mbappe also displayed another lousy attitude to their coach, Thomas Tuchel, who substituted him after hammering Montpellier Hérault SC 5-0.

The champions maintained their winning run as they showed their dominance at their Parc des Princes. The visitors’ problem started after their 21-year-old goalkeeper Dimitry Bertaud was sent off after just 17 minutes for a handball outside of his box with Kylian Mbappé on the charge.

Mbappé converted the spot-kick to add his name to Pablo Sarabia’s on the scoresheet, while  Angel di Maria and Layvin Kurzawa also added to the goal tally.

Displeased when he was substituted for Mauro Icardi on 68 minutes, Mbape displayed an unprofessional attitude towards his manager.

Reacting after the match, Tuchel, who is not angry over such an attitude he said creates distraction said it’s unnecessary as no player likes being substituted. PSG remained undefeated in 19 games in all competitions and is 13 points.