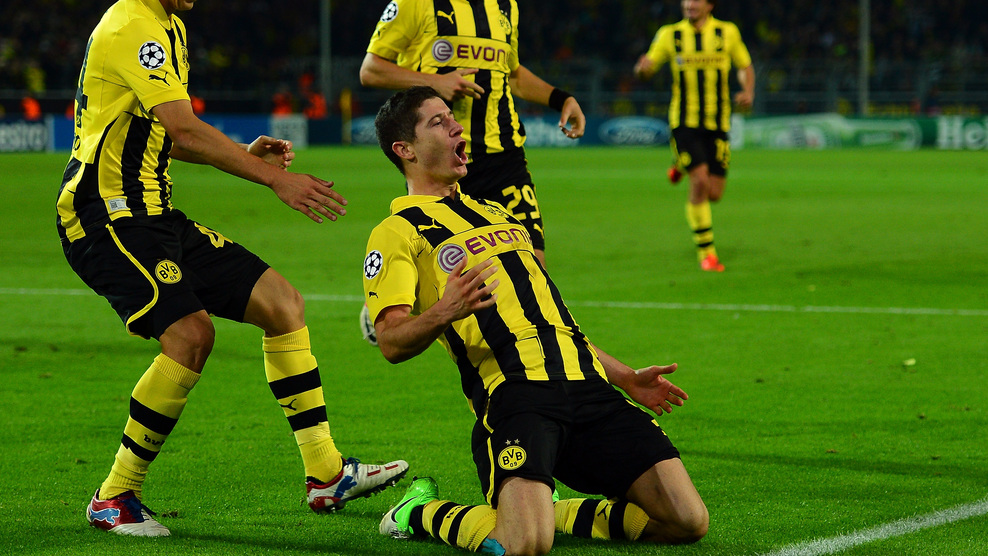 The Polish striker logged his name in the record books as the first player in the European competition’s history to score four goals against the Los Blancos, resulting in the German outfit being a big step ahead for a possible finals berth in the elite competition.

Cristiano Ronaldo seemed to have given the visitors an important away goal, but Lewandowski clearly overshadowed him with an inspired individual performance.

Jurgen Klopp’s men showed their intention in the match by coming close to scoring in just seven minutes when Marco Reus took a shot from the edge of the box to test Diego Lopez. Lewandowski failed to capitalise on the rebound, while Sergio Ramos got back to make a block.

However, Dortmund’s resolve was rewarded only a minute later when the Polish forward got free from Pepe inside the box to sweep home Mario Gotze’s cross to send the fans into a frenzy.

Real failed to respond immediately and took some time before they had their first shot on target when Ronaldo fired a free kick from 35 yards out but Roman Weidenfeller was up to the task and pushed the ball away.

The momentum swung to Madrid’s favour when Dortmund tried to call for a penalty only to surrender their lead.

Marco Reus went down in Real’s box after pressure from Raphael Varane, but with their appeals falling on deaf ears, the swift counter-attack allowed Gonzalo Higuain to unselfishly cross the ball to the unmarked Ronaldo for a simple goal.

In the start of the second half, Dortmund seemed to regain their composure and took a 2-1 lead five minutes after the restart after Lewandowski collected Reus’ shot to poke the ball towards the goal despite shouts of offside from Madrid.

Things started to turn the way of the hosts and at the 55th minute, the Polish striker completed his hat-trick with a stunning finish. Marcel Schmelzer’s cross found the forward inside the penalty area and he dragged the ball back past Pepe before hitting an unstoppable shot high into the goal to beat Lopez.

And on the 67th minute, a penalty was awarded to Dortmund after Reus was ran over by Xabi Alonso. Lewandowski collected himself from the spot and drilled the ball down the middle after sending Lopez the wrong way.