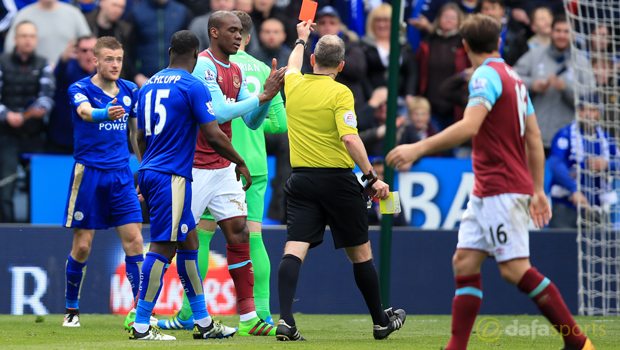 Jamie Vardy will miss Leicester’s trip to Manchester United on Sunday after being banned for an additional game following his sending off against West Ham.

The striker was dismissed when awarded a second booking for diving by referee Jon Moss and caused controversy with his angry reaction to the decision after he confronted the official.

Having initially missed Sunday’s 4-0 win over Swansea, he will also be absent for this weekend’s trip to Old Trafford, while in addition he will need to pay a fine of £10,000.

Following Tottenham’s surprise 1-1 draw against West Brom on Monday, the Foxes will head into the game knowing a victory will see them win the Premier League title and become top-flight champions for the first time in the club’s history.

Claudio Ranieri’s men are currently priced at 3.60 to win at United, while the draw is 3.30 and the in-form Red Devils are 2.00 favourites.

Leicester have also been fined £20,000 for their players’ behaviour in the closing stages of the 2-2 draw against the Hammers.

An FA statement read: “Following an Independent Regulatory Commission hearing, Jamie Vardy has been given a one-match suspension with immediate effect, fined £10,000 and warned as to his future conduct.

“The Leicester City forward had accepted an FA charge of improper conduct following his second-half dismissal against West Ham United on Sunday 17 April 2016.

“Meanwhile, the club has been fined £20,000 after admitting an FA charge of failing to ensure its players conducted themselves in an orderly fashion.

“The standard penalty, which the club accepted, followed an 83rd-minute incident during the same fixture.”