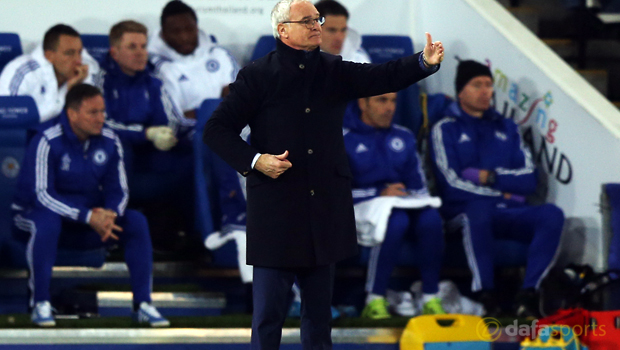 Manager Claudio Ranieri insists Leicester’s expectation levels can be increased once the team have reached the magic 40-point mark this season.

The Foxes have been the surprise package this term and continue to defy the odds as they sit top of the Premier League table by two points from Arsenal.

Jamie Vardy’s 15th goal of the campaign and a sublime finish from Riyad Mahrez gave City a 2-1 win over defending champions Chelsea on Monday night at the King Power Stadium.

It was the 10th victory of the season and Ranieri, who only took over in the summer after the departure of Nigel Pearson, looked delighted to get one over on his former employers.

Leicester have now amassed 35 points, having suffered just one defeat so far, and no club that has had the same amount of points at this stage has failed to finish outside of the top four.

Many fans are pinching themselves at the form of their club, especially when they only just survived last season having been bottom of the table for long periods.

Sustaining the current run will be difficult for the Foxes and while many neutrals are hoping the title charge will continue, Ranieri insists the goal is still to secure safety before looking higher.

“I put that target at the beginning of the season. When we achieve 40 points, we will change our goal,” he said. “It’s a magical time, we must continue to work hard because I don’t want to wake up. I want to continue to dream with our fans.”

Leicester, who are 21.00 to win the league, face an away trip to Everton on Saturday and the visitors are outsiders at 3.60, while the draw is priced at 3.50 and the Toffees are 2.05 favourites.