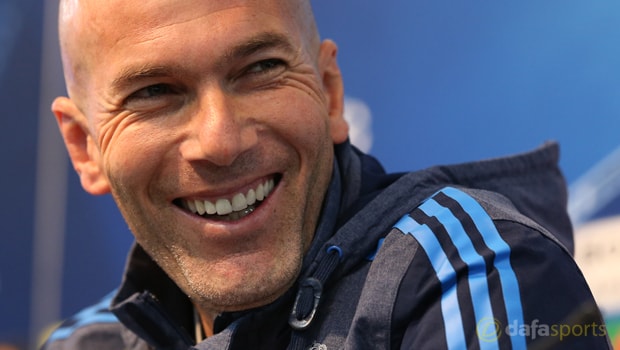 Zinedine Zidane says he is happy with his Real Madrid squad and is comfortable working with those at his disposal.

After winning both La Liga and the Champions League last term, Los Blancos have enjoyed a quiet summer window by their standards, only signing youngsters Theo Hernandez and Dani Ceballos.

Danilo, Alvaro Morata and James Rodriguez have all left the Bernabeu while rumours continue to swirl about a potential deal for Monaco’s Kylian Mbappe.

Real have lost all three of their pre-season International Champions Cup games, going down to Manchester United, Manchester City and, perhaps most alarmingly, bitter rivals Barcelona.

They are due to round off their time in the USA with a clash against the MLS All-Stars on Wednesday before turning their attention the UEFA Super Cup against United.

With a month to go until the close of the transfer window, there is still plenty of time for clubs to do some business although Real’s approach this summer has perhaps epitomised their change of direction in recent years.

While the board previously revelled in signing ‘Galacticos’, recent summers have seen them focus on acquiring younger players as well as developing from their own academy.

Zidane seems in favour of this policy and admits he is more than happy. “Signings? It’s the same question as 10 days ago,” he said.

“I’m here to work with what I have. For now, we’re the way we are and I’m happy with this squad.”

Real are currently the 1.36 favourites to start their season with silverware by lifting the Super Cup, with United 2.88 to succeed in Macedonian capital Skopje.