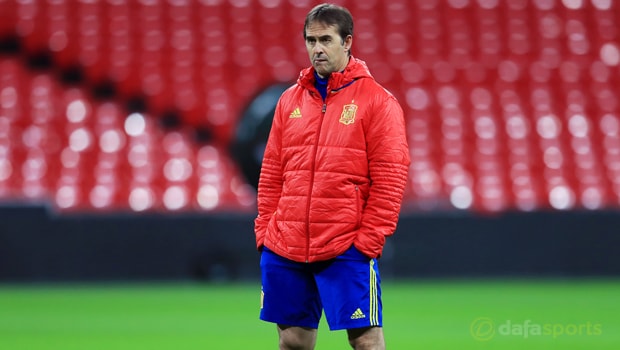 Former Spain boss Vicente del Bosque is confident Julen Lopetegui has everything required to succeed at Real Madrid after being confirmed as Zinedine Zidane’s successor on Tuesday.

Zidane shocked the footballing world when he stepped down as Madrid boss just days after winning a third successive Champions League crown and the Spanish giants suddenly found themselves in the market for a new chief.

Several names were linked with the position at the Bernabeu including Tottenham Hotspur’s Mauricio Pochettino and Real’s current youth team boss Guti, who spent 24 years at the club as a player.

However, in a move nobody expected, Los Blancos confirmed Spain coach Lopetegui would be taking over following the conclusion of the 2018 World Cup in Russia.

The 51-year-old has agreed a three-year contract and it will be his third job at club level, having previously been in charge of Rayo Vallecano in 2003 and Porto from 2014-2016.

Del Bosque, who managed both Spain and Madrid during his illustrious career, has backed Lopetegui to impress at the Bernabeu over the next three years.

He told the Express: “I always lean towards the Spanish coaches. I think Lopetegui is ready to train Real Madrid.”

Lopetegui will be hoping to end his Spain stint by winning the 2018 World Cup and the Red Fury kick off their quest for glory against Portugal on Friday night.

The Spaniards, who are 7.00 to win the tournament, are 1.95 favourites to clinch victory in their opening Group B clash, a draw is priced at 3.30 whilst the Euro 2016 champions are the outsiders at 4.33.