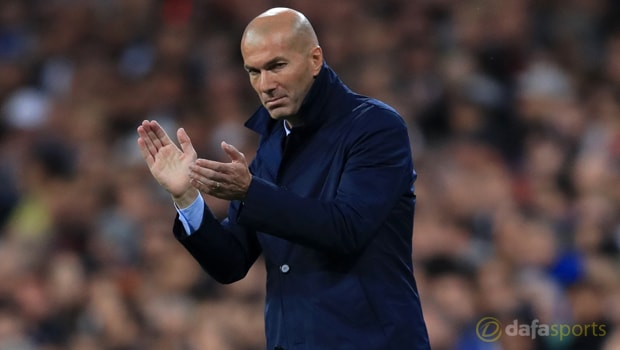 Real Madrid boss Zinedine Zidane says the Copa del Rey is an important competition for him after watching his fringe players overcome Fuenlabrada 2-0 in the competition on Thursday night.

Madrid, 2.50 to win the La Liga title, went into the game as the overwhelming favourites but their opponents put up a brave fight.

After a poor 60 minutes of action, the game eventually burst into life and Madrid were awarded a penalty after right-back Achraf Hakimi went down.

Marco Asensio stepped up and scored before Lucas Vazquez then scored from the spot when Theo Hernandez went down in the box at a corner.

Madrid are now in total control ahead of the second leg at the Santiago Bernabeu on November 29 and Zidane was pleased to see his fringe players do the business.

The former playmaker has never won the competition as a manger or player and he is determined to win it this time around.

He told reporters: “I’m very happy with the performance, it is a positive result.

We showed seriousness and intensity from the start. It is a 2-0, clean sheet, and by being patient in the second half we found the gaps. “This is an important competition for me.

It’s true those who played had less time before, but they showed intensity and physically lasted out the game.

It means they are all ready to show in any minute. “We know the difficulty of the calendar and we are ready for that.

We have La Liga [Girona] next, and then the Champions League [Tottenham].”