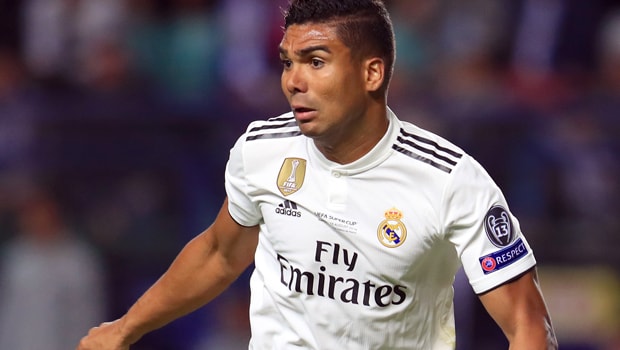 Casemiro says Real Madrid are not using the loss of Cristiano Ronaldo as an excuse for Wednesday’s UEFA Super Cup defeat to Atletico Madrid and the midfielder insists the team have full confidence in the new manager.

Madrid were left reeling after Zinedine Zidane decided to step down as head coach just days after winning the Champions League for the third successive year before another huge moment came in the transfer market.

Los Blancos have since appointed former Spain boss Julen Lopetegui as their new manager although Ronaldo has not been replaced, meaning the likes of Gareth Bale, Isco and Karim Benzema will have to step up to the plate.

Madrid lost 4-2 to rivals Atletico in the UEFA Super Cup final after extra-time and there are already question marks being raised over the future of the new man in charge after the disappointing display.

However, Brazil international Casemiro has shrugged off claims suggesting the team are still missing Ronaldo and insists the whole squad will give their all for Lopetegui this season.

“Of course we miss Cristiano, but that’s in the past now,” he told reporters.

“We cannot talk about Cristiano to cover things up, because any team would miss Cristiano. We are upset about losing a trophy but this is just the start.

“We have total confidence in our coach and giving excuses is not what Real Madrid do.”

Madrid start their domestic campaign on Sunday with a home clash against Getafe and the hosts are firm 1.22 favourites to win, a draw is priced at 6.50 whilst the visitors are 13.00 outsiders.