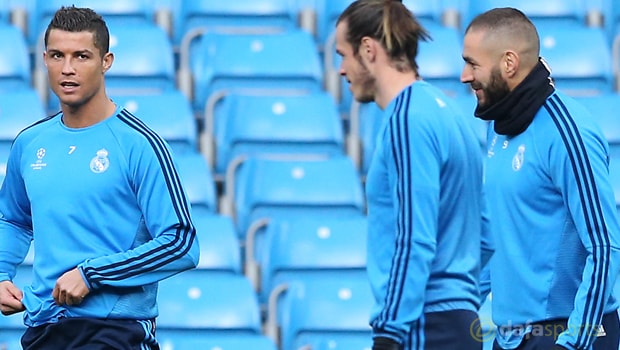 Zinedine Zidane was pleased after watching his big-name trio of Gareth Bale, Karim Benzema and Cristiano Ronaldo all get on the scoresheet in a 4-0 win over Alaves at the Bernabeu.

It has been a troubled season for the Madrid boss but their latest win is another confidence booster as they look to recover.

Ronaldo opened the scoring before Bale, playing his first 90 minutes in a Madrid shirt since September, made it 2-0. The Portuguese headed in a third before Benzema made it four from the penalty spot.

That meant Madrid’s “BBC” strike force were all on the scoresheet for the first time since April 2016.

Benzema had come under attack from sections of the Bernabeu support after missing a couple of decent goalscoring chances earlier in the game.

Despite being on a hat-trick, Ronaldo handed the ball to the French international allowing him to convert the late penalty. That gesture was not missed by Zidane.

“I am happy for Cristiano’s nice gesture with Karim,” he said. “This shows he is a team player. It is something positive for me.

“Karim deserved this, to score a goal, as he had played a very good game. There is always pressure when you are Real Madrid’s No. 9, he is used to that. I am happy for all of it – another four goals, a clean sheet, all that we did.”

Zidane will be eager to build momentum ahead of next month’s trip to Paris to face PSG in their Champions League last-16 second leg.

Madrid are holding a 3-1 advantage from the first leg and, with their La Liga hopes long gone, their manager may need a strong run in Europe to save his job.

Welsh winger Bale also earned the seal of approval from Zidane for his performance in the win over Alaves, where he excelled on the left-hand side.

“Bale played a good game today, played the 90 minutes, in a position where he has not played recently,” Zidane said.

“Gareth did very well in the 4-4-2. That went well for us. I wanted to see Gareth in this position, then we will see what happens in the coming games.”

Real Madrid are 6.50 to win a third straight Champions League title this season, while they are 4.50 to win in Paris against PSG.