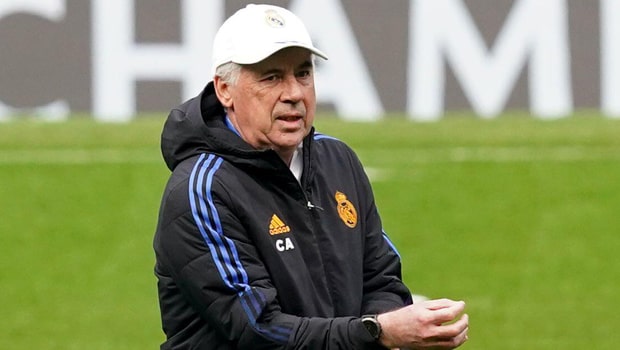 Real Madrid manager Carlo Ancelotti is now setting his sights on the UEFA Champions League trophy after leading Real Madrid to the La Liga crown at the weekend with a 4-0 thumping of Espanyol.

The Los Blancos needed just a point to secure the title at the weekend for their 35th La Liga crown, and they did it in an emphatic fashion, scoring four times on the night.

Rodrygo scored twice in the first half before Marco Asensio, and Karim Benzema added late goals to secure the title. Before the game, Real Madrid was fifteen points ahead of Sevilla and Barcelona in second and third positions; thus, the victory means that but teams cannot catch up with them.

The title win also means that Carlo Ancelotti is the first manager to win a league title in Germany, France, Spain, Italy, and the Premier League in England.

While celebrating the feat with the players, Carlo Ancelotti revealed that he was happy with the achievement but that he’s still hungry for more success with the Los Blancos.

He also stated that he’s looking forward to the second leg of the UEFA Champions League semi-final tie with Manchester City on Wednesday.

“It’s something I am truly proud about. It means I’ve done pretty well, but I want to keep going. I’m at Real Madrid, and I’m proud of that. I want to win more titles here. So, see you all on Wednesday! That’s my message for the players and the fans.” Ancelotti said.

Real Madrid lost the first leg of the semi-final clash at the Etihad Stadium last week with a 4-3 scoreline in the seven-goal thriller.

Karim Benzema scored a brace while Vinicius Jnr also added another to ensure that Real Madrid kept up with Pep Guardiola’s side in the semi-final fixture.