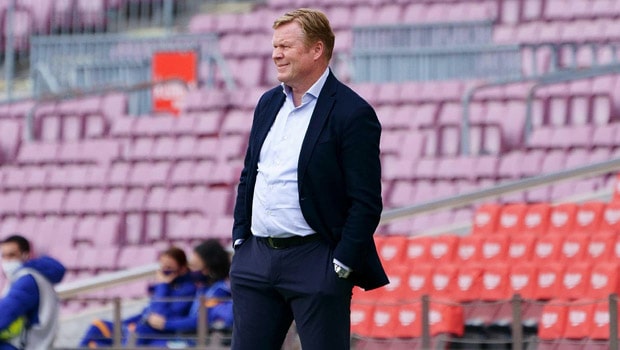 Barcelona would have Ronald Koeman remain as the manager of the club for the 2020/2021 season despite reports linking the club to the possibility of a new manager recently.

Club president Joan Laporta revealed this in a statement released on Thursday revealing that club has agreed to allow the Dutch manager to continue on his contract.

“We will give continuity to the current contract that Ronald Koeman has, We are very satisfied because the talks have resulted in a unity of criteria for what has to be done during the season,” Laporta said.

Ronald Koeman was appointed to replace Quique Setien and he was able to win the Copa Del Rey but the season wasn’t considered as entirely successful after falling short of the La Liga title and the UEFA Champions League.

This has led to various departure talks with many considering former Barcelona midfielder and legend Xavi as a replacement.

Koeman has just one year left on his contract and it is understood that his contract can be extended depending on a successful 2021/2022 season.

Already the club has started preparing for that with the signing of players. The team has signed three players already this week with Eric Garcia, Sergio Aguero, and Emerson all due to join the club at the end of July.

Eric Garcia and Sergio Aguero both come in from Premier League champions Manchester City with the Argentine striker, Aguero, coming in on a free with his contract expiring this summer while Emerson was brought in from Real Betis.

Liverpool midfielder Gini Wijnaldum and Dutch forward Memphis Depay are both expected to join the club very soon with negotiations going on already.

The transfer activities are expected to convince skipper Lionel Messi to stay at the Camp Nou for next season although nothing is confirmed yet about the future of the Argentine.