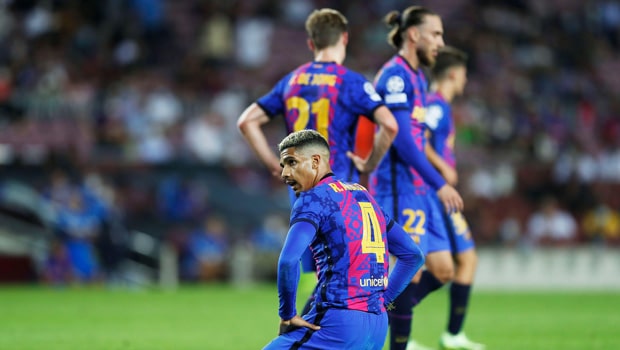 Barcelona were saved from an embarrassing loss to Granada on Monday evening when Ronald Araujo headed in a late equaliser at the Camp Nou in their 1-1 draw in the La Liga.

The visitors had gone into an early lead as early the 2nd minute of the game through a Coutinho Meneses Duarte header.

For a long time Barcelona failed to disturb Granada’s goal as the first half ended in the favour of the visitors.

Granada may not be without a win yet this season but they were two minutes away from their second win at the Camp Nou in two seasons.

Barcelona were beaten in the UEFA Champions League last week by Bayern Munich while Granada were beatem 2-1 by Real Betis in the La Liga last weekend.

Ronald Koeman’s side sits in seventh position with 8 points from 4 matches played so far.

They are already 5 points (with a game outstanding) behind Real Madrid who are top of the log with 13 points having also left it late against Valencia with a 2-1.

French striker Karim Benzema and Brazilian youngster Vinicius Jnr scored back to back with five minutes left on the game.

Granada are in seventeenth position just above the drop zone with 3 points from 5 games. They are above Celta Vigo who have a single point and the duo of Getafe and Alaves who have no point yet.

On Wednesday Espanyol will play with Alaves, Sevilla will host Valencia, Real Madrid will welcome Real Mallorca to the Santiago Bernabeau.