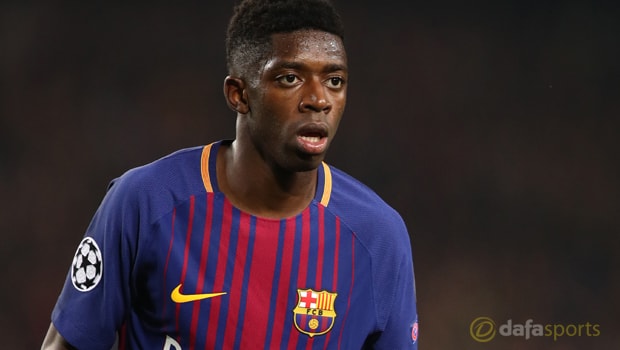 Ousmane Dembele insists he has no intention of leaving Barcelona and he is convinced he can establish himself as a Camp Nou regular.

The Catalan giants paid a club-record fee to sign the Frenchman last summer after Neymar’s move to Paris Saint-Germain but Dembele has struggled to make his mark this season.

The forward has suffered with injury and missed over three months at the start of the season with a thigh problem, with a similar issue sidelining him again from mid-January for around a month.

The 20-year-old has been unable to command a regular starting spot since his return, while the capture of Philippe Coutinho – which set a new club-record – has increased the competition for places in the Barca attack.

There also has been speculation linking the La Liga leaders with a summer move for Atletico Madrid’s Antoine Griezmann, which could see Dembele’s chances limited further.

However, the former Borussia Dortmund forward has stressed he has no plans to end his spell at Camp Nou after just one season.

“I signed a five-year contract at Barcelona. I’m going to be in Barcelona a very long time. I’m not going to leave after a season,” he told Telefoot.

“I’m not in my best form, but little by little, it’s coming back. I still have to work on my cardio because I get tired very quickly. At Barcelona, I have a better lifestyle. At Dortmund, I didn’t have a great lifestyle and I didn’t get injured, so it’s not that.”