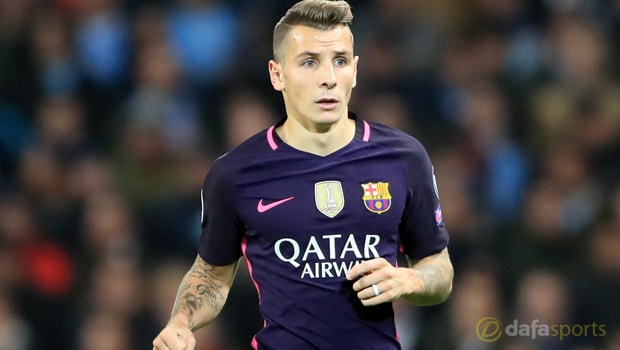 French left-back Lucas Digne says he is determined to stay at Barcelona and help the club fight for trophies.

The defender joined the Blaugrana last summer but saw his first-team opportunities limited by a combination of the presence of Jordi Alba and Luis Enrique’s tactical tinkering.

As a result, he featured in just four of his side’s last 16 matches and it has been suggested he could be seeking a way out of the Nou Camp.

Despite still being only 23, Digne has already played for four clubs as having started his career at Lille, he then joined Paris Saint-Germain in 2013.

He spent the 2015-16 season on loan at Roma before moving to Barca last summer following an impressive campaign for the Giallorossi.

After so much upheaval in recent years, he now appears ready to settle although recent reports have suggested he could be deemed surplus to requirements by new Blaugrana boss Ernesto Valverde.

The France international insists that is not the case though, rejecting the speculation and insisting that he is ready to help Barcelona win more silverware next season.

“Of course I’m staying at Barca,” Digne is quoted as saying by El Mundo Deportivo. “I only have one focus, one plan, and that’s to play for Barcelona in the coming seasons.

There’s no other discussion. “I’ve heard rumours about me leaving, but it’s rubbish, [they are] false stories.

I can’t wait for the new season to begin. I am going to work hard and fight so that I’m able to play more games and make my mark.”

Barcelona are currently the joint 5.50 favourites alongside Real Madrid to win the 2017-18 Champions League, with Bayern Munich next in the betting at 6.00.