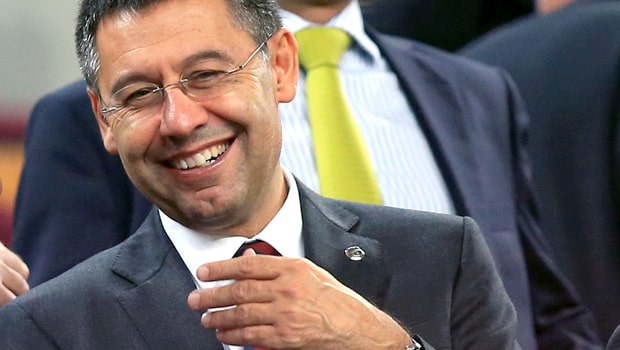 Barcelona president Josep Bartomeu has confirmed the club have already started to work on outgoing deals ahead of this summer’s transfer window.

The Spanish champions are planning for next season following their Copa del Rey disappointment on Saturday evening.

Barcelona saw their four-year cup streak ended as they were beaten 2-1 by Valencia. Goals from Kevin Gameiro and Rodrigo Moreno scored in the first half at the Benito Villamarin stadium saw Los Che end Barca’s chances of a double.

The likes of Andre Gomes, Malcom Samuel Umtiti and Philippe Coutinho have all been linked with a Nou Camp exit and Bartomeu confirms the club are ready to reduce the size of their squad.

He said: “The season ends with the La Liga title. It wasn’t to be in the Copa del Rey and we keep moving forward.

“Every year new players come in. So far we have confirmed De Jong’s signing and now we will work on bringing in others and moving players on, as is normal every summer.

While Barcelona were left disappointed, Valencia won their first major trophy since 2008 and captain Dani Parejo admits it was a special moment in his career.

“I’m so happy because for me, my family, it’s incredible,” said Parejo.

“A club like Valencia deserves a lot more joy like this. I don’t have the words, it’s incredible. “We’ve made history in a really significant year, our centenary year.”