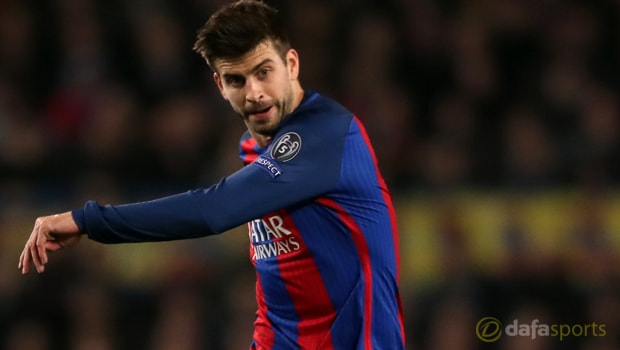 Gerard Pique says he feels ‘inferior’ to Real Madrid for the first time in his near decade-long career with Barcelona after their resounding Super Cup loss again their arch-rivals.

Barcelona went down 2-0 in the second leg at the Bernabeu on Wednesday, losing 5-1 on aggregate to their bitter rivals, after first-half strikes from Marco Asensio and Karim Benzema.

The only goal scored by Ernesto Valverde’s team across the two legs came from the penalty spot.

Meanwhile opposite number Zinedine Zidane was able to leave Gareth Bale and Isco on the bench despite the suspension of Cristiano Ronaldo for the second leg.

Pique has enjoyed plenty dominance over Real during his trophy-laden stint at the Camp Nou but the central defender admits he is worried by the current situation, though he also warns it is a long season ahead.

“This a long process and there is room for improvement, but in the nine years that I have been here, it is the first time that I feel inferior to Madrid,” Pique said.

“We are not in the best moment, either as a team or as a club. We must stay as close as possible and keep moving forwards.”

Barca lost Neymar to Paris St-Germain this summer but the club have stated they are ‘close’ to bringing in Liverpool’s Philippe Coutinho as a replacement.

Valverde admitted that Real Madrid were worthy winners over the two legs, as he also told his squad they must adapt to what is now a different set of circumstances for the Catalan club.

“When you lose and you have the feeling that the opponent has, in some moments, been better, you have to analyse the technical aspects,” Valverde said. “We wanted to win, but it could not be.

“We have to recover psychologically. We have to adapt because things have changed.”

Barcelona are 2.00 to win La Liga this season, with Real Madrid favourites at 1.85 to retain their title.