Depay on target in Barcelona’s win against Getafe 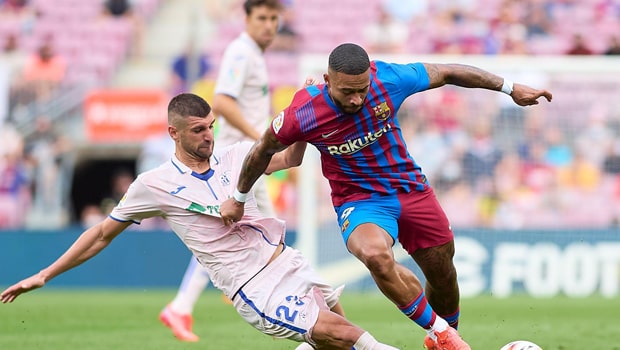 Dutch forward Memphis Depay was instrumental as Barcelona shrugged off a stubborn Getafe on Sunday to return to winning ways in the La Liga.

The Catalunya side were held to a 1-1 draw in their last outing by Athletic Club with manager Ronald Koeman insisting that Messi’s departure has given their La Liga opponents more courage to play against Barca.

However, after assisting Gerard Pique’s opener in the 4-2 win over Real Sociedad on the opening day of the season, Depay was the saviour for Ronald Koeman’s side in the 1-1 draw on match week 2.

The former Lyon winger became the first player to either score or assist a goal in each of his first three La Liga games for Barcelona since Cesc Fabregas in 2011, when he scored the team’s second goal and match winner on Sunday against Getafe.

Barcelona had gotten into the lead, against a side that is yet to record a single point on the La Liga this season, as early as the 2nd minute through Sergi Roberto.

However, Getafe equalised moments alter through Sandro Ramirez in the 18th minute. Depay then ensured that Barca went into the break in the lead with a dazzling run on the half hour mark.

Barcelona held on to the lead and ended the game on a winning note to make it two wins and a draw from three La Liga games this season.

Meanwhile, on Saturday, Real Madrid kept up with the top of the table with a 1-0 win over Real Betis.

Dani Carvajal’s goal on the hour mark was all Real Madrid meeded for their second win of the season.

After the international break Real Madrid will host Celta Vigo while Barcelona will face Sevilla.