Barcelona trampled in Portugal by Benfica 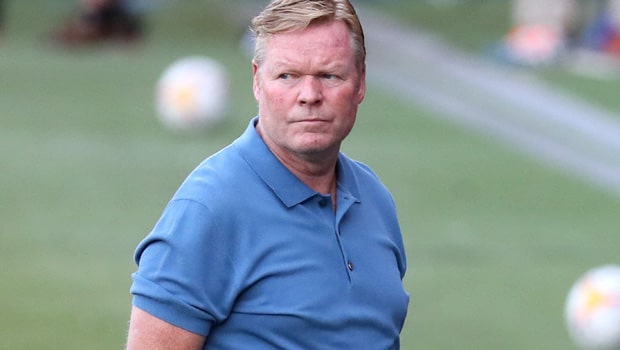 Barcelona were well beaten in Portugal as Benfica strolled to all three points against the Spaniards on Wednesday evening with a 3-0 scoreline.

The Catalonia side were hoping for their first victory in the UEFA Champions League this season after a successful weekend that saw them beat Levante 3-0.

However, a win looked pretty difficult from the start after Benfica went into an early lead in the 3rd minute of the game through Nunez.

He also scored the third to assure the victory for the Portuguese side in the 80th minute of the game after Ferreira Silva had scored in the 69th minute.

Barcelona were then reduced to ten men after Eric Garcia’s second bookable offence with just few minutes left in the game.

It is the second 3-0 loss for Barcelona after been beaten by Bayern Munich with the same scoreline at the Camp Nou for the first group game.

The Bavarians were equally rampant against Dynamo Kiev in Germany beating the Ukrainians 5-0 the same night.

Meanwhile, Ronald Koeman will hope to relieve some of the pressure on him when Barca face Dynamo Kiev in the double header after the international break.

It is potentially the easiest set of games for Barcelona in the group and victories in both games will put the team’s round of 16 attempt back on track.

Meanwhile, Sevilla were involved in another dramatic 1-1 draw against Wolfsburg on Wednesday in Germany.

Sevilla were lucky to have gotten a point in matchday one encounter against RB Salzburg who were awarded three penalties on the night but only converted one.

While Sevilla scored a penalty of theirs in the game, they had to rely on another penalty on Wednesday with Ivan Rakitic scoring with three minutes left to deny Wolfsburg who had the lead since the 48th minutes.

UEFA Europa League champions Villarreal were denied a point in Manchester via a Ronaldo’s late strike in a 2-1 loss.