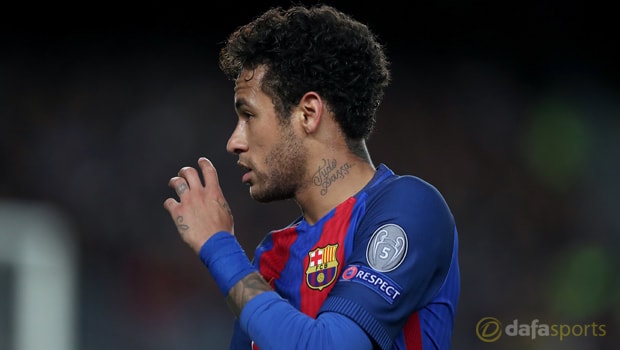 Barcelona say they have no worries that Neymar might be interested in leaving the club this summer amid reported interest from Paris Saint-Germain.

Reports in the Spanish press this week suggested PSG are ready to pay the 222million euros release clause – double the world-record transfer fee – to sign Neymar, if the player gives an indication he would be willing to play in Ligue 1.

Separately it has been suggested Neymar was growing ‘uncomfortable’ at getting second billing behind Lionel Messi at the Nou Camp.

Barca’s club spokesperson Josep Vives is not moved by any suggestion that the Brazilian forward is unhappy at the club and says Neymar shows all the signs of being content.

“The only thing we care is he keeps being happy here,” Vives said at a news conference.

“He played a magnificent season and he is still one of the best in the world.

“He is happy in the club and the club is happy with him. He verbalises it and he shows it with his attitude.

We are relaxed about that and we only hope next season is better than the last one.”

Barcelona sporting director Robert Fernandez does not believe PSG, or any other club, would be willing to meet the release clause in Neymar’s contract.

“That’s not going to happen,” he said when asked if he could imagine Barca being without Neymar.

“We have not had any offers for any player in our squad and no club will pay the release clause.”

Barcelona are 1.95 to win La Liga next season, with reigning champions Real Madrid 1.91 to make it back-to-back domestic triumphs.