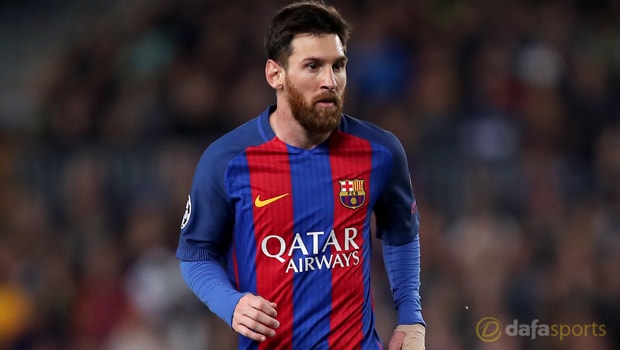 He says he expects the Argentine superstar will ink a new deal in the coming weeks and insists that contract talks are now ‘in the final straight’.

Messi’s current contract expires in 2018 and he is currently in talks over a new deal to extend his stay at the Catalan giants.

He scored his 50th and 51st goals of the campaign on Saturday against Villarreal as Barcelona maintained the pressure on Real Madrid at the top of La Liga.

They lead the way on head-to-head from their bitter rivals but Real crucially have a game in hand.

Reports this week suggested Messi had turned down an offer worth between €30m and €35m per season, something Mestre was content to deny after the win against Villarreal.

“The truth is everything looks good,” Mestre told TV3. “Everything will end up well.

If they’re saying there are problems [with the talks] in Madrid, then I’m delighted to be able to contradict them.”

Previous reports in the Spanish press have suggested that Messi’s next contract will be until 2022 and that recent new deals signed by strike partners Luis Suarez and Neymar have laid the foundations for him to commit his future to the club.

President Josep Maria Bartomeu is on record as stating they are happy to make him the highest paid player in the world with his next deal.

Mestre expects news to arrive soon on the outcome of talks. “Lionel Messi’s contract renewal is on track.

I’d say we’ve hit the final straight and in a few weeks there will be news. I cannot give an exact date, but it won’t be long,” he added.

Messi’s Argentina are 10.00 to win next summer’s World Cup in Russia, while Spain are 9.50 and reigning champions Germany are 6.00.