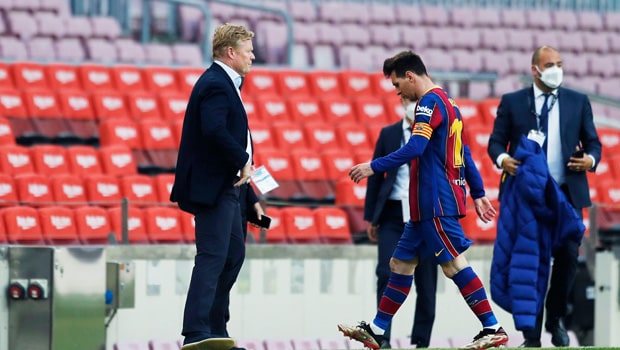 Barcelona dropped out of the La Liga title race on Sunday after the Blaugrana dropped points against Celta Vigo at the Camp Nou while the duo of Atletico Madrid and Real Madrid won against their respective opponents.

Barcelona was defeated after a late goal from Santi Mina, who got the two goals for Celta Viga, condemned Ronald Koeman’s side to a defeat and also out of the title race.

The home side got the lead through skipper Lionel Messi who scored in the 28th minute but the lead lasted just ten minutes as Santi Mina got his first goal in the 38th minute.

The second half of the game was not eventful until Clement Lenglet got a second booking on the night in the 83rd minute to reduce Barcelona to ten men.

It was six minutes later that Santi Mina got the winner with just a minute left to be played as Celta drained the remaining hopes for a title win for Barcelona.

Meanwhile, former Barca forward Luis Suarez and Atletico Madrid made sure that Diego Simeone’s men remained in control of the title race with a dramatic comeback victory over Osasuna.

The visitors took the lead through Ante Budimir in the 75th minute after Atletico had seen a goal disallowed earlier in the second half.

Renan Lodi and Luis Suarez scored in the final ten minutes of the game to ensure the win.

Meanwhile, City rivals, Real Madrid ensured that the title win will only be confirmed on the final day of the season after another late goal ensured Zinedine Zidane’s side still has a slim chance of winning the title on the final day.

The midfielder, Nacho pulled home the winner from a Casemiro cross in the 68th minute. Atletico Madrid still remains at the top of the table with 83 points, just two above Real Madrid in second.