10-Man Barcelona held in Cadiz, while Betis and Sociedad win 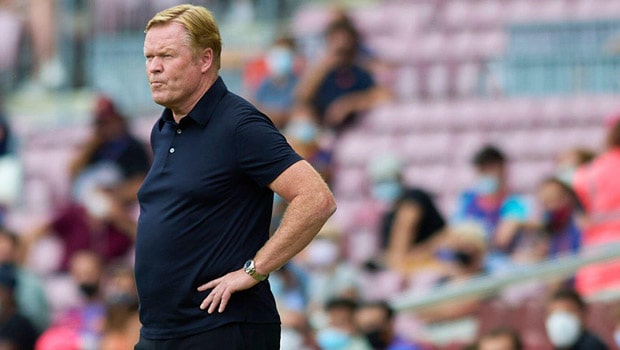 Barcelona suffered a setback in their bid to catch up with both Madrid clubs in the race for the La Liga after they were held to a 0-0 draw by Cadiz.

Ronald Koeman’s side may have a game in hand but they are seven points behind Real Madrid at the top of the table.

Despite a dominant first half from Barcelona, which saw Cadiz without a shot at all, Cadiz grew in confidence in the second half with 13 attempts.

This was made even easier when Frankie De Jong got two yellow cards within four minutes to get sent off in the 65th minute of the game.

The night was completed with drama as manager Ronald Koeman was sent off in added time.

Barcelona will face Levante at the Camp Nou at the weekend while Cadiz face Rayo Vallecano.

Real Sociedad came from behind to beat their hosts Granada 3-2 on Thursday evening. Granada had led through German Sanchez early in the 9th minute of the first half.

Despite the immense pressure by Sociedad in the first half, the equaliser didn’t come until the second half when Aritz Elustondo scored in the 52nd minute before Mikel Merino put them in the lead 8 minutes later.

Luis Mills drew the hosts level from the spot in the 70th minute, before Elustondo got his brace from the spot as well with 8th minute left to play.

However, the goal was enough to see the visitors leave with all three points, their first in three matches in all competitions.

Meanwhile, Real Betis made it three wins in four games in all competitions after beating Osasuna 3-1 on Thursday.

Despite a close encounter, Betis got their winner from Juanmi with ten minutes left, while Willian Jose made sure the victory with a strike in added time.