Suarez On Target for Atletico as Barcelona Win 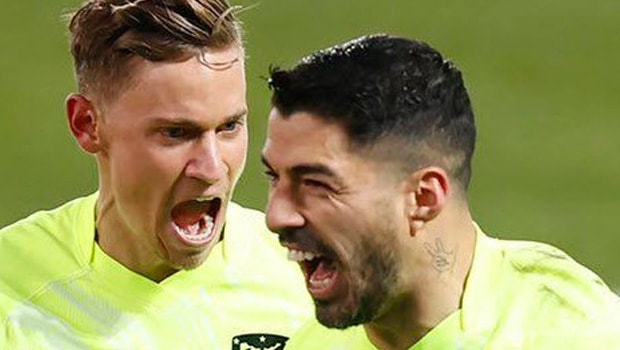 A late Luis Suarez goal gave Atletico Madrid a 2-1 victory against the Oliver’s in the La Liga on Sunday.

Marco’s Llorente had scored for Atletico Madrid in the first half but an own goal by Filipe Luis in the 84th minute give Alaves a lifeline to a point but late into the game in the 90th minute, Luis Suarez scored the winner as Atlético Madrid went away with all three points.

During the last week, former Chelsea striker Diego Costa and Atletico Madrid mutually agreed to terminate the striker’s contract leaving that team with Joao Felix and Luis Suarez did not disappoint in the game as he scored the late winner.

Meanwhile, Barcelona beat Huesca 1-0 through a first-half goal from Frenkie De Jong. The Dutchman scored from a Lionel Messi’s assist in the 27th minute.

The Argentine striker is free to negotiate with teams in the January transfer window as he moves into the final six months of his contract at Barcelona, and he has made known his intention to play in the MLS.

Messi had planned to quit the Camp Nou side in the summer with Inter Milan, PSG, and Manchester City all linked to his signature, but none of it materialized.

In other matches on Sunday, Atletico Bilbao beat Elche by 1-0 as Iker Munian’s first half goal secured the win.

Real Sociedad played out a 1-1 draw with Osasuna, and Eibar beat Granada 2-0.