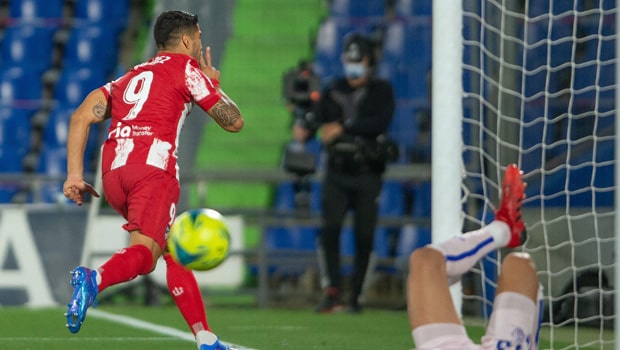 Luis Suarez was at the double on Tuesday evening as Atletico Madrid came from behind to beat ten-man Getafe.

The hosts were winless and pointless in their first five matches of the season and there were hopes of a first victory, when Stefan Mitrovic gave them a first half lead right before the break.

Diego Someone’s side pressed hard for an equaliser but there wasn’t a breakthrough until the tide of the game changed when Spanish midfielder Carles Alana was careless enough to get red carded in the 75th minute.

This gave Atletico Madrid the momentum as Luis Suarez struck three minutes later and the former Barcelona striker was on hand to get the winner late into the game as Atletico Madrid topped the La Liga momentarily.

Getafe remains pointless alongside Alaves at the 19th and 20th positions respectively on the table.

Alaves will hope Atletico Madrid’s visit on Saturday will bring their first La Liga point of the season while Getafe will continue their search for the season’s first point away at Real Betis.

Also on Tuesday Iago Aspas and Brais Mendez scores on either sides of Roger Martin’s lost penalty to give Celta Vigo a 2-0 win over Levante while Atletico Madrid and Rayo Vallecano played a 1-1 draw.

Wednesday’s fixtures aren’t complete until Villarreal welcomes Elche while matchday six ends on Thursday with three matches involving Real Sociedad’s trip to Granada, Betis travel to Osasuna, while Barcelona will hope that Cadiz doesn’t cause an upset like Granada almost did on Sunday, until Ronald Araujo’s header at end of Monday’s match at the Camp Nou.