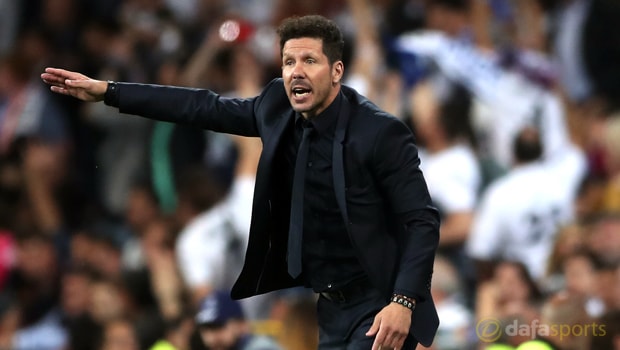 Atletico Madrid coach Diego Simeone is convinced his side have the quality to overcome a three-goal deficit and reach the Champions League final.

Los Colchoneros host city rivals Real Madrid in the second leg of their semi-final clash on Wednesday and face a huge task to progress to the final after a 3-0 first-leg defeat at the Bernabeu.

No side has ever managed to overturn such a deficit or even come back from two goals behind at this stage of the competition, but Simeone insists he has total faith in his players.

The Argentine coach admits his side will have to be at their absolute best but he has refused to give up on Champions League progress ahead of the clash at the Vicente Calderon.

“We trust in ourselves, we know our strengths, what we are capable of doing,” Simeone told reporters.

“We will not move from this for tomorrow’s game.

“I trust a lot in my players. I know most of them for five and a half years, and have no doubt that tomorrow will be a good game. We want to start the game strongly, like all teams playing at home.

“Keeping control of the emotions is important to play a good game. The players will feel the atmosphere, in a semifinal, and they need that. But it is a football game, about what you do with the ball.”

He added: “All games are different. We are up against a huge team tomorrow, who beat us 3-0 at home in La Liga [this season], 3-0 in the first leg, who beat us in two finals [the Champions League in 2014 and 2016], once in extra time, once on penalties, so it is clear it is a nice challenge for us.”