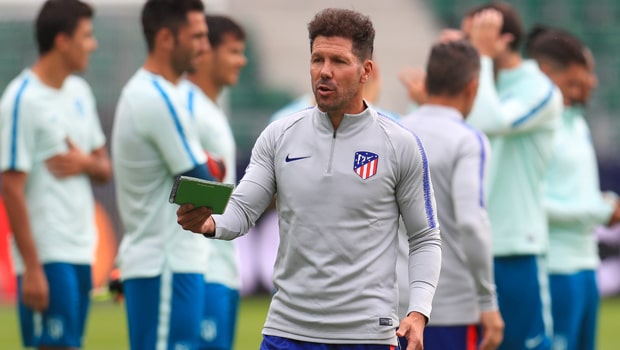 Atletico Madrid manager Diego Simeone has signed a contract extension which will tie him to the Spanish capital until 2022. Simone is the longest-serving current La Liga manager, having been appointed in 2011.

He has regularly been linked with various Premier League clubs when high-profile jobs have come on the market, but it appears the Argentine will continue his love-affair with Atletico for a while yet.

The 48-year-old has led the club to the La Liga title in 2014 and has twice won the Europa League for the team at which he previously starred as a player.

Atletico’s dramatic title win is the only time in the last 14 years a team other than Barcelona or Real Madrid has claimed the La Liga crown and it was the club’s first since 1996.

Aside from winning two Europa League crowns, Simeone has also twice brought Atletico within touching distance of winning the Champions League, as they lost to arch-rivals Real in both the 2014 and 2016 finals.

In the 2014 Lisbon final, Diego Godin’s first-half strike looked to have done enough, only for Sergio Ramos to head Real on terms deep into stoppage time at the end.

Gareth Bale, Marcelo and Cristiano Ronaldo would all score as Atletico ran out of gas in extra-time. Simone has been named La Liga’s coach of the year three times during his tenure.

“I have high hopes for the future,” he said having inked his new deal.

“I see hard work, I see players focused on improving, I see excitement, I see youth.

“All of this can make us grow as a team, and I know that if the four legs remain strong and firm like they have until now, we’re going to continue in the same way.”

Atletico face Juventus in the last-16 of this season’s Champions League. They are 2.80 to win the first leg on home soil next Wednesday, with Juve slight favourites at 2.75 and the draw priced at 3.10.