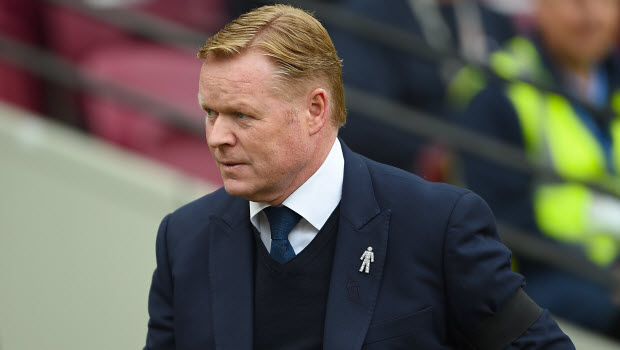 Ronald Koeman has called for a motivated finish to the season from Everton after their 3-0 home reverse against Chelsea on Sunday.

The Toffees boss was not too disappointed with how his side matched up against the champions-elect for long periods, with Chelsea surging clear late on after a stunning second-half opener from Pedro was supplemented by goals from Gary Cahill and Willian.

Results on Saturday mean Everton will not finish lower than seventh this season, securing a best finish in three years and a spot in next season’s Europa League.

The home side almost hit the front during a frantic start against Chelsea when Dominic Calvert-Lewin struck the post from a tight angle. For Koeman, there were positives in the defeat, Everton’s first Premier League home reverse of 2017.

“We did well, until 1-0 maybe. After that we had more problems but that was all about their quality, before that we played well and made it tough for them,” said the Dutchman.

“Maybe we didn’t create a lot of chances, but I was happy. Idrissa Gueye played a fantastic game, Hazard was not the player he can be because of the man-marking.”

While their spot in seventh is now secure, Koeman doesn’t want Everton going into holiday-mode over the remaining four games of the season, starting at relegation-threatened Swansea on Saturday.

Paul Clement’s side served notice of their determination to beat the drop in a 1-1 draw with Manchester United at Old Trafford on Sunday. “It is really tough to beat Chelsea.

They showed their belief and their quality. They will be champions. We need to find the motivation to finish the season strongly,” the Everton boss added.