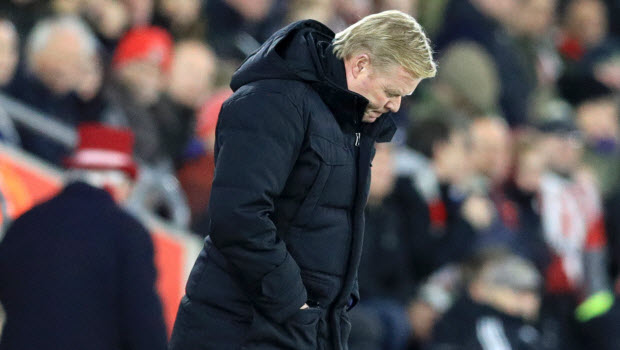 Ronald Koeman has admitted he is worried about Everton’s performances following their 1-0 defeat at the hands of his former club Southampton on Sunday.

The Dutchman made a good start to life after taking over from Roberto Martinez last summer with some suggesting they could maybe push for a top-four finish.

However, they are now on a terrible run and have won just once in their last nine games in all competitions. The Toffees still remain seventh in the Premier League – just five points adrift of fifth-placed Tottenham – but Koeman has admitted to feeling worried.

Everton never really got going in Sunday’s trip to St Mary’s and Charlie Austin’s first-minute goal handed all three points to the home side.

Southampton arguably deserved to come away with a more comfortable victory as they outplayed the visitors in a very one-sided affair.

Koeman says he is worried about the level of performances over the last couple of months and he feels there is a lack of organisation.

“I’m not worried about results, I’m worried about what I see on the pitch,” Koeman told reporters. “How we start the game, have difficulties to be organised defensively and stop the opponents.

I’m worried because the wake-up call, how we played in first half, to concede a goal after one minute: that cannot happen. “It’s incredible.

You start a game to control a game and we didn’t; we had bad defending positions for the cross. That (goal) made it difficult and a different game.

“The whole first half was not good. (We had) problems with (Southampton’s) strikers, and that’s strange because we know how they play.

We need to be sharp, react fast to second balls. But we had some good chances in the first half; the shot from (Idrissa) Gueye needs to be on target.”

Everton are priced at 3.40 to get back to winning ways next time out when they host Manchester United, who can be backed at 2.15 to take all three points from Goodison Park, while the draw is available at 3.25.