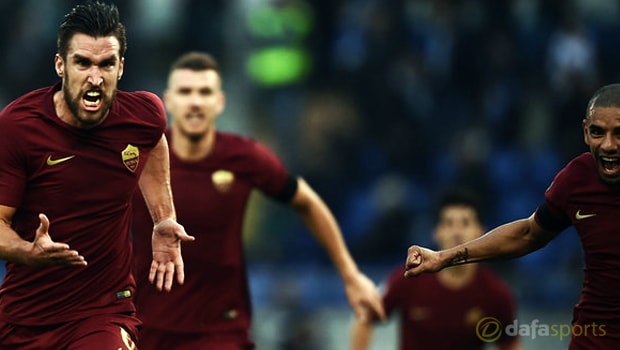 Kevin Strootman has urged his Roma side to focus on their trip to Juventus at the weekend following Monday’s 1-0 win over AC Milan.

Having won the Derby della Capitale against Lazio earlier this month, the Giallorossi followed it up against the Rossoneri when Radja Nainggolan’s second-half strike made the difference in a scrappy game at the Stadio Olimpico.

Roma, who are now 7.50 to win Serie A, undoubtedly rode their luck at times, with goalkeeper Wojciech Szczesny saving a first-half penalty from M’Baye Niang.

Things do not get any easier for Luciano Spalletti’s men, however, as they are due to travel to Turin to face leaders Juventus on Saturday.

Strootman admits Monday’s win against one of their main rivals was hugely important for Roma, especially as it helped to consolidate second place in the Serie A standings.

The Dutchman is refusing to get carried away, insisting that his side must get a result at the weekend against Juve if they want to consider themselves genuine title contenders.

“This game was very important. The three points in the derby would’ve been useless if we didn’t win today as well,” Strootman told Mediaset Premium.

“It’s true we fought hard and against the big clubs you need to focus on just taking the points home, so that’s what we did.

“From tomorrow we’ll start to think about Juventus. It’ll be difficult because they often win at home.

We can’t talk about competing with Juventus for the Scudetto, we have to prove it on the pitch.”