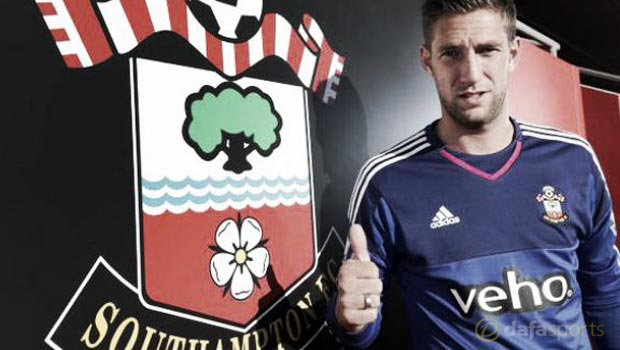 Southampton’s veteran stopper Kelvin Davis has welcomed the arrival of goalkeeping competition at St Mary’s, in the shape of Maarten Stekelenburg.

The 32-year-old Dutch international, who has 54 caps for his country, joined the Saints on a season-long loan from Fulham last month.

With England goalkeeper Fraser Forster continuing to be absent with a serious knee injury sustained at the back end of last season, it means Stekelenburg will vie with Davis, 38, and the Argentine Paulo Gazzaniga for the number one jersey for the new campaign.

However, it looks highly likely that the new arrival will start the season as number one with Davis battling for a spot on the bench despite finishing last season in goal after Forster sustained his injury in March.

Davis has welcomed the arrival of Stekelenburg to St Mary’s and insists he has no hard feelings with Ronald Koeman over his decision to bring in another keeper, one which could relegate him to back-up yet again.

He said: “I think for a few seasons now, the writing’s on the wall in terms of what the manager’s looked to do, and last season again he said to me there would be another goalkeeper coming in and I support that decision.

“There’s always only ever been one goalkeeper on the pitch at one time, and competition is good for everyone.

“I think the manager’s done what was expected, and let’s not forget that he’s brought an international goalkeeper to the club, with fantastic experience, and he’s a good lad as well. One that will fit into the dressing room nicely.”

Southampton start the season with a trip to face Newcastle and the Saints are priced at 2.38 for the win, with the hosts at 3.00 and the draw at 3.10.