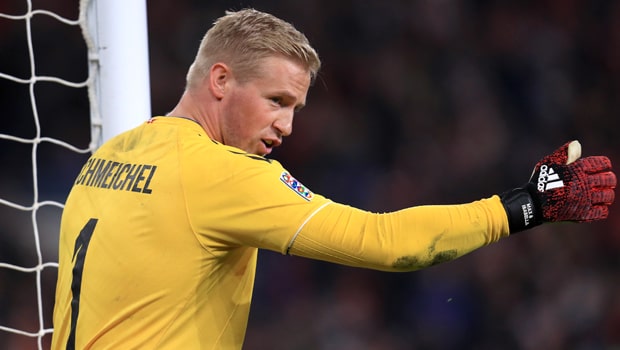 Kasper Schmeichel admits that Wales manager Ryan Giggs has been his idol since childhood.

The Leicester City shot-stopper will be hoping to get one over on Giggs when Denmark take on his Wales side in Cardiff on Friday night in a crucial UEFA Nations League encounter.

Wales know victory will secure top spot in Group B4, while the Danes would also secure the group if they can triumph in Cardiff.

Denmark won the reverse game 2-0 in Copenhagen and will be confident of topping the section should they take a point home, with victory over the Republic of Ireland at home in their final game then being enough to overhaul Giggs’ side.

Schmeichel has known Giggs since he was a child, as his father Peter and the Wales manager were team-mates in the all-conquering Manchester United team of Sir Alex Ferguson in the late 1990s and early 2000s. The admiration hasn’t diminished over the years.

“Ryan Giggs is an idol – I don’t think there’s any other words for him,” Schmeichel said at Denmark’s pre-match press conference.

“What he achieved at Manchester United, and what he achieved in football, is unparalleled. He’s someone I’ve known since I can remember from my time living in England.”

The goalkeeper got first-hand experience of watching Giggs train during his prime and Schmeichel says he has always been kind with his time.

“I watched him countless times at The Cliff (United’s former training ground) with my dad, and he’s someone I’ve admired right through my career.

If anyone could have a fraction of the career he’s had they would be very happy,” he added.

“He’s always been really supportive every time I’ve met him, he’s been nothing but a gentleman.”