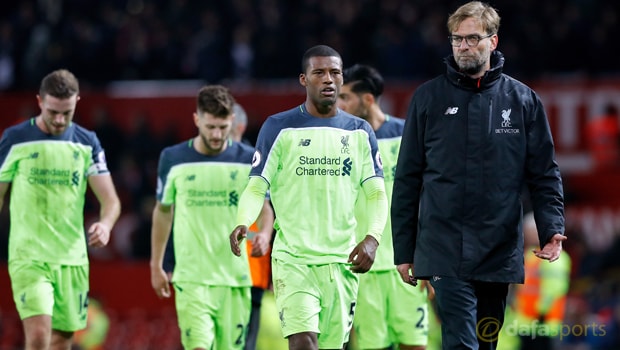 Jurgen Klopp praised Liverpool for their performance in Sunday’s 1-1 draw with Manchester United at Old Trafford, insisting they deserved to win the game.

The Reds led for a long time after James Milner’s scored from the penalty spot on 27 minutes but Zlatan Ibrahimovic headed home six minutes from full time to ensure a share of the spoils for the second time this season between rival bosses Klopp and Jose Mourinho.

The German felt his team were better equipped to win the game than their hosts, and he was happy to take some positives despite having to settle for a point.

“It was a very positive performance. We were the better side, played better football and had a better plan,” he told Sky Sports.

“I had a few line-up problems but the boys did really well and played good football. Unfortunately, we only scored with a penalty and I think of other situations when we could have been a little bit more clinical to score.

Especially in the last 20 minutes when Untied only played long balls, then it was difficult. “I think we would have deserved the three points today but now we take one and that’s OK.

The performance was good.” The point at Old Trafford moved Liverpool back above Arsenal into third spot, level on points with second-placed Tottenham and seven adrift of league leaders Chelsea.

United meanwhile are in sixth spot, five points behind their Merseyside rivals.

Klopp felt that a neutral assessment of the game at Old Trafford would conclude there was only one team likely to win the match.

“I think about the performance and what we have to do usually to win a game, think about the quality of the opponents, think about everything and then watch the game again, pull off the shirts and say who can win then today it would have been my team,” he added.

Liverpool are 7.00 to win the title this season, while Chelsea are 1.62 to be crowned champions.