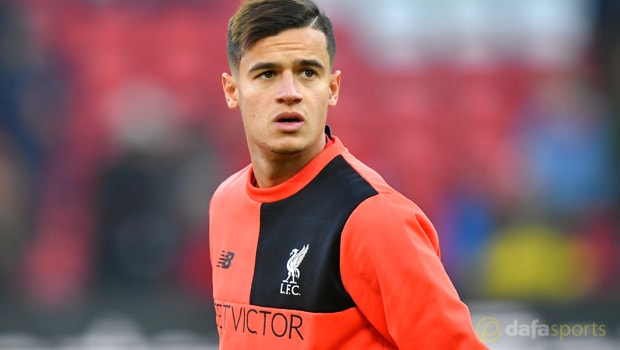 Liverpool playmaker Philippe Coutinho is on the verge of returning from an injury lay-off and boss Jurgen Klopp has reiterated the Brazilian star is not for sale.

Coutinho has been on the sidelines since November 26 with a knee ligament injury but it’s expected he will feature at some point in Wednesday’s EFL Cup first-leg semi-final clash with Premier League rivals Southampton.

The playmaker was influential in helping Liverpool, who are priced at 2.50 to win the EFL Cup, enjoy a strong first half to the campaign before he sustained his injury and his performances led to renewed interest from the top clubs across Europe.

Reports were quick to link the former Inter Milan man with a move elsewhere and it’s understood that Spanish giants Barcelona and Real Madrid are at the front of the queue.

However, Klopp insists the Anfield outfit have no intention to part company with their star man as they look to embark on a successful few years.

Klopp saw his Liverpool side lose in two finals during the 2015-16 campaign and he has continued to see improvements as they remain in with a chance of claiming the EFL Cup and the Premier League title.

The German sees Coutinho playing a key role in any future success and has stressed that the midfielder is contracted to the club until 2020.

Klopp said: “We never had any ideas or plans or any talks about him leaving, because he is our player – there are no other ideas, nothing has changed.

“It would be nice if big clubs forgot about a player completely because he’s been injured for five or six weeks.

“Big clubs don’t think in this way unfortunately. It was not a big injury so there was no question of him not being the same player afterwards.

“I’m not sure it’s like this though, but he is our player and that is it.”