Jurgen Klopp refuses to be downbeat after Hammers blow 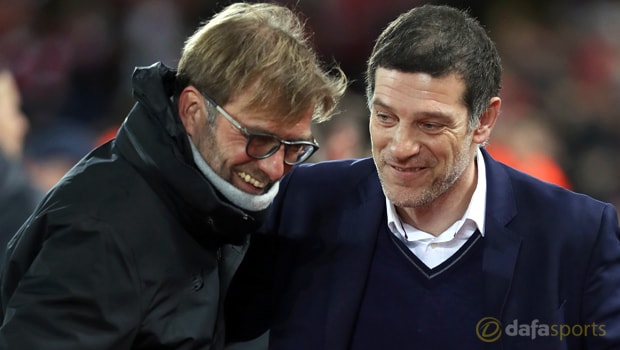 Jurgen Klopp refused to be critical of his team after Liverpool slipped up in their 2-2 draw with West Ham at Anfield.

The stalemate was just the second time the Reds have failed to win at home in the league this season and sees them end the weekend six points adrift of Premier League leaders Chelsea in third spot.

Adam Lallana fired Liverpool ahead early on but a Dimitri Payet free-kick levelled before Michail Antonio took advantage of the Reds defence to put Slaven Bilic’s team in front at the break.

Divock Origi restored parity but, despite being camped in West Ham territory in the closing stages, Liverpool could not engineer a winning goal.

“In the second half we had lots of situations in the box,” the manager told reporters. “I’m pretty sure we could have had one or two penalties given.

We have to take it. It felt like we was in their box for the whole game but it’s not that simple. It’s all about making the right decisions and you need a little bit of luck.

“A draw doesn’t feel too good, but it doesn’t feel too bad either.” Under-fire goalkeeper Loris Karius got a hand to Payet’s free-kick but could not keep the ball out, while Joel Matip’s error allowed Antonio his chance to poke home West Ham’s second goal.

Klopp was in no mood to point the finger at either Karius or Matip afterwards. “The first goal was a wonderful free-kick and the second was an unlucky,” Klopp told Sky Sports.

“We shouldn’t have lost the ball before we made the foul for the free-kick. The passes played were deflected and Joel, who played a fantastic game, couldn’t clear the ball and then Loris was surprised like everybody.”

Liverpool are 7.50 to win the Premier League this season while the Reds are 1.22 to finish in the top four.