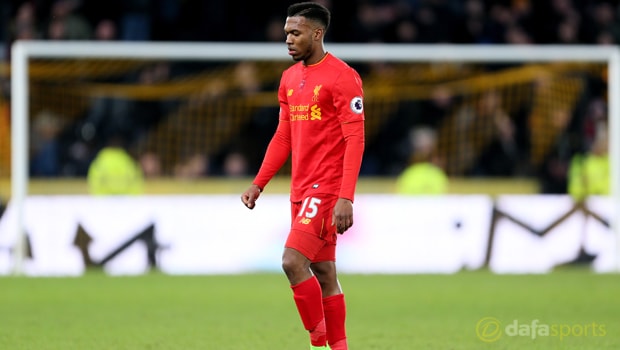 Daniel Sturridge’s future at Liverpool is looking very uncertain after manager Jurgen Klopp revealed the pair will hold talks at the end of the season.

Sturridge, who joined the Reds in January 2013 from Chelsea, enjoyed a good start to life at Anfield and he was a regular fixture during his first 18 months at the club.

The England international scored 31 goals from his first 43 Premier League appearances for the Merseyside outfit and he was regarded as one of the best strikers in the country at the time.

However, injuries have plagued the 27-year-old and since the start of the 2014-15 season he’s only made 23 Premier League starts due to a combination of various different ailments.

The Birmingham-born star has only started five Premier League matches this season and several reports have suggested he will be shown the exit door in the summer.

Klopp’s comments have done little to ease Sturridge’s future fears and the German tactician has confirmed the duo will have a good talk at the end of the campaign.

“We will make decisions and speak about Daniel and any other players about what will happen at the end of the season,” he said.

“A lot of things will influence this and we can speak about it when it is time.”

Liverpool, who are 2.00 to finish in the top-four, will be looking to bounce back from Monday’s 3-1 defeat at Leicester in Saturday’s home clash against Arsenal.

The Reds are the narrow 2.05 favourites to clinch all three points, a draw is priced at 3.50 while the Gunners, who are 51.00 to win the title this term, are also a 3.50 chance to claim all the spoils.