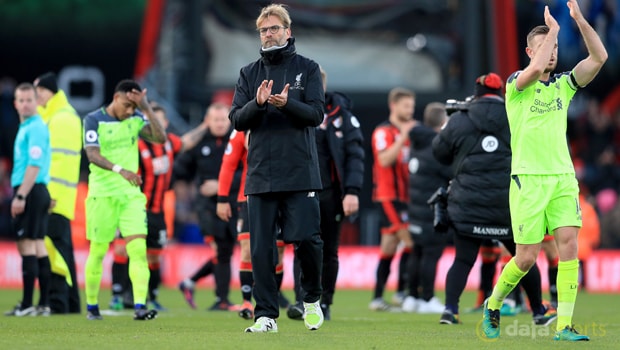 Jurgen Klopp admits watching Liverpool throw away a 3-1 lead in their defeat at Bournemouth was ‘an experience nobody wants’, but he says his players must learn from it.

The Reds boss paid tribute to Eddie Howe’s Bournemouth, insisting they deserved to win the game despite Liverpool having dominated for long spells.

Klopp felt Liverpool were found wanting in key moments as he insisted they must not make similar mistakes again.

Sadio Mane, Divock Origi and Emre Can appeared to have Liverpool on course for victory after 65 minutes, with Callum Wilson’s penalty the sole response from Bournemouth.

Klopp had no excuses for the defeat, which ended Liverpool’s 15-game unbeaten run, and keeps them third in the Premier League table, four points off league leaders Chelsea.

“It’s absolutely a deserved win for Bournemouth – congratulations on this performance and this big fight,” he told Sky Sports.

“I think for a long part of the game we were the better side, but in the decisive moment we gave the game away. We opened the door and Bournemouth ran through with all they had.”

Klopp felt Liverpool were guilty of too many sloppy passes, as well as some poor decision making late in the game.

“We gave the ball away, without reason, and played the wrong passes at the wrong moment.

Things like this happen, this is not the biggest and the most serious thing in life, but in football it can lead to a result,” he added.

“We have to learn from it, it’s an experience nobody wants, it doesn’t feel too good but sometimes you need it.”

Liverpool are 5.50 to win the Premier League this season while they are 1.30 to get three points from their next game against West Ham on Sunday.