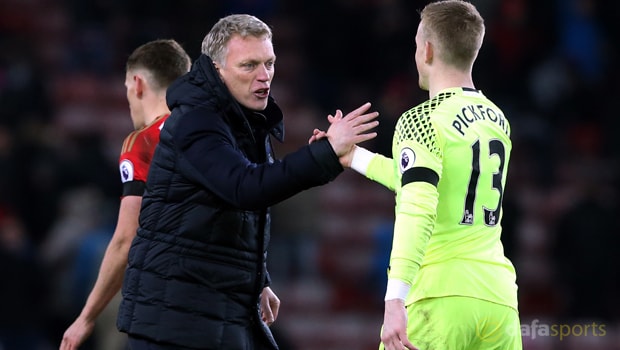 David Moyes says he ‘expects’ Sunderland goalkeeper Jordan Pickford to deliver the sort of heroic save that secured three points against Leicester at the Stadium of Light on Saturday.

The 22-year-old produced a stunning one-handed stop in stoppage time to deny Wes Morgan an equaliser as Sunderland defeated the Premier League champions 2-1.

It meant back-to-back home wins for the Black Cats and three wins in four games for Moyes and his players.

Sunderland jumped off the bottom of the table as a result and they now sit in 18th place, just one point from climbing out of the relegation zone.

Moyes felt his side were more than worthy winners of the game against Leicester but they still needed their goalkeeper to get them over the line.

While Pickford is far from the finished product, his manager feels he has the ability to produce game-defining saves.

“It was a great save,” said Moyes. “I have said many times that I am expecting that from him. He’s that calibre of goalkeeper.

“He’s young and had some moments which weren’t as clean as you’d like. You could see there was a little bit of inexperience in his play but when it comes to those situations, he has been terrific for us.”

While it took an own-goal from Robert Huth beyond the hour mark to get Sunderland’s noses in front, Moyes felt the opening half hour was the best football his side have produced this season so far.

“From the first whistle, it was the best we’ve played in the opening 30 minutes,” Moyes added.

“We had several opportunities and we played well, which is something we’ve not tended to do.”

Sunderland are 3.40 to win away at Swansea in their next game while the Black Cats are 1.83 to be relegated this season.