Juanfran up for Atletico Madrid derby 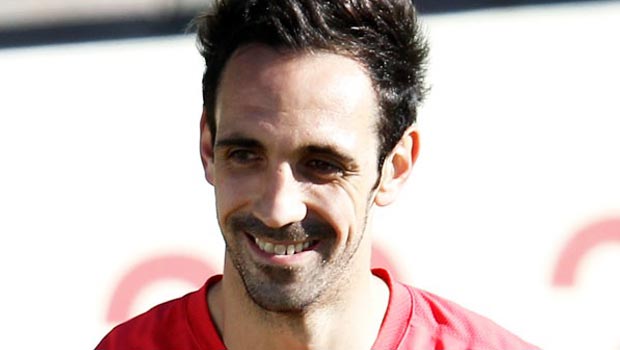 Atletico Madrid defender Juanfran has called on his team-mates to back up their Super Cup win over Real Madrid when they travel to the Bernabeu on Saturday.

The two sides drew 1-1 at the Bernabeu, with James Rodriguez opening the scoring in the last 10 minutes before Raul Garcia equalised for the visitors.

In the return leg at the Vicente Calderon, Mario Mandzukic’s goal after 80 seconds proved to be the winner but Juanfran admits there was not much between Atletico and Real.

He said: “There will be few surprises. It will be a game similar to previous ones.

“Every year, the rivalry is more intense and more beautiful. When we are with the Spanish national team, we speak and these are the games everyone likes to play.

“We are eager to play then. It will be decided by the details. In the Super Cup we had the chance to win, there were minimal details and we took advantage of them.

“We grew strong and hopefully, the same can happen and we can win.”

Atletico, who have lost the likes of Diego Costa, Filipe Luis and Thibaut Courtois since the end of last season, kicked off their title defence with a 0-0 draw at Rayo Vallecano.

Diego Simeone’s men then beat Eibar 2-1thanks to first-half goals from Miranda and Mandzukic.

Real won their opening game before being stunned 4-2 at Real Sociedad after taking a two-goal lead just 11 minutes into the match.