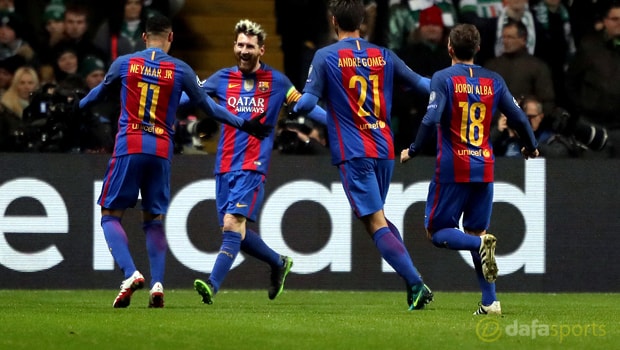 Barcelona’s president Josep Maria Bartomeu is adamant that forward Lionel Messi will end his career at the club.

Recent reports have linked Messi with a move away from the club, with some claiming that he will not stay when his contract expires in 2018.

The Argentinian has been in fine form this season, scoring 12 goals from 13 league matches heading into the Christmas break.

He will miss his side’s final game of 2016, with boss Luis Enrique deciding to rest him for Wednesday’s Copa del Rey second leg clash with Hercules.

Barca are planning to offer him another deal in the coming months as they try to tie down the club’s all-time leading goalscorer to the Nou Camp for the rest of his career.

Speaking about Messi’s future, Bartomeu insists he expects him to stay while also claiming he deserves to win the Ballon d’Or every year.

He told reporters on Tuesday: “We’d like him to finish his career here. Messi wants to continue because he’s happy, it’s his club.

Messi is the best player in history, we’d like him to finish his career here and we’ll work hard to make sure of that.

“The Ballon d’Or should be Messi’s every year as he is the best player in the history of football. There are other good players but Messi is undoubtedly No 1.”

Messi will be hoping he can help Barcelona defend their La Liga title but they are three points behind rivals Real Madrid, with Zinedine Zidane’s men also having a game in hand.