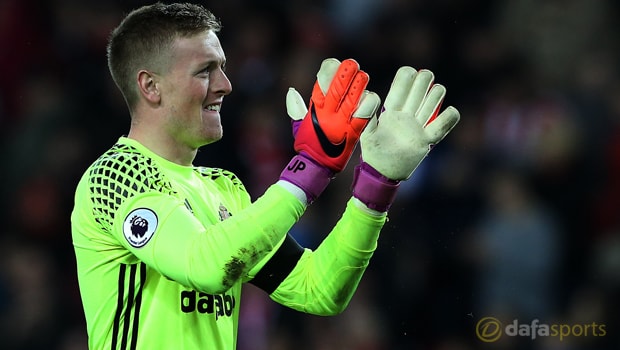 Jordan Pickford is setting his sights on a Boxing Day clean sheet as Sunderland head for Old Trafford to tackle in-form Manchester United.

The Red Devils’ form has picked up this month, winning their three most recent games against Tottenham, Crystal Palace and West Brom.

Sunderland too have been on a decent run of form, David Moyes’ side earning four wins in seven games after a dreadful start to the season.

The Black Cats remain in the relegation zone over Christmas however, and face a tough exam against Jose Mourinho’s team.

Pickford was delighted with his shutout against Watford last weekend in a 1-0 win at the Stadium of Light. “It’s nice to get a clean sheet because I’m not getting them as much as I would like to.

I will take each clean sheet as it comes because from a goalkeeper’s point of view there is definitely nothing better than that,” he told the Sunderland website.

Burnley managed to frustrate United on their own patch earlier this season, Sean Dyche’s side rolling up with a determined game-plan geared towards frustrating the home side.

Pickford suggests that former United boss Moyes may have something similar in mind for the trip to the Theatre of Dreams and the 22-year-old shot-stopper suggests a clean sheet could be the foundation for a famous result.

“This is why the Premier League is one of the best leagues in the world because we are going up against some top, top players,” he added.

“We have got to go there and show we don’t fear them. We have to stick to our game plan, keep a clean sheet and then like you say anything can happen.”

Sunderland are 13.00 to win against Manchester United while they are 10.00 to keep a clean sheet.