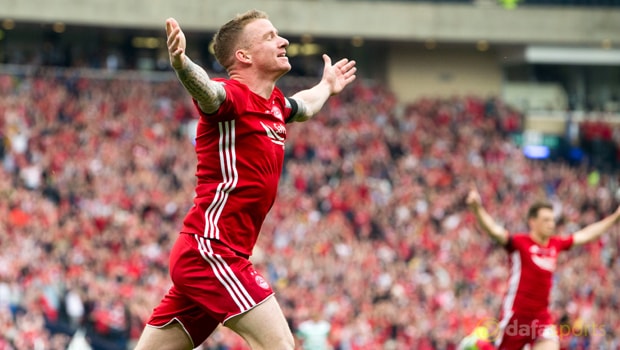 Aberdeen winger Jonny Hayes admits reports linking him with a move to Celtic are flattering but he is unsure where he will be playing his football next season.

The Republic of Ireland international is highly sort after following an impressive campaign for the Dons that saw him net 11 goals in 44 appearances in all competitions.

Championship club Cardiff have reportedly tabled a £1.2million bid for the 29-year-old, while Birmingham and Nottingham Forest are also believed to be interested in his services.

However, it is Celtic that appear to be leading the race for the Dubliner, with Hoops boss Brendan Rodgers known to be an admirer of the former Inverness player.

Hayes himself is flattered by Celtic’s interest, but he remains unsure if he will be leaving Aberdeen this summer.

“We’ve obviously known about it (Celtic’s interest) for a while now,” Hayes told the Scottish Sun. “There have been a few things developing with the club.

It means you are doing something right if somebody else is taking a look. “You can take it as a compliment. As far as I’m aware I am still an Aberdeen player.

I enjoy it there and it’s an old cliche but we’ll wait and see what happens.”

Hayes only signed a new contract with Aberdeen in January and he insists he is happy at Pittodrie and he is not looking to force through a move elsewhere.

“I just wanted to finish the season with Aberdeen and I signed a new deal there in January.

I was really just concentrating on that,” he added. “Whatever happens over the summer will happen.”

Should Hayes join Celtic then he will become the club’s first signing of the summer, as Rodgers bids to freshen up his squad following last season’s unprecedented treble success.