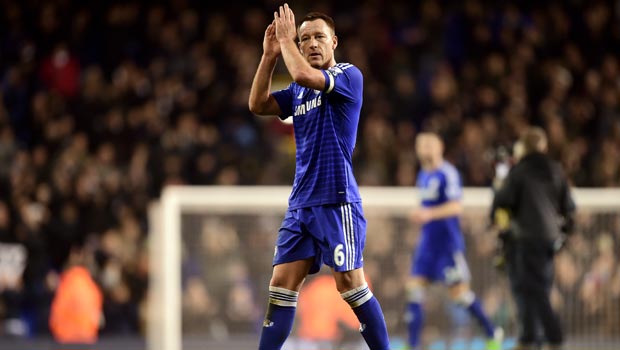 Chelsea captain John Terry is confident the side will bounce back from the defeat to Tottenham and retake the lead in the Premier League.

The Blues were eight points clear at the top of the table in November but are now level with Manchester City after losing at Spurs on New Year’s Day.

Their 5-3 defeat at White Hart Lane means Chelsea are without a win in two league games after drawing at Southampton on December 28 and leaves Jose Mourinho’s side on 46 points along with City.

But Terry is confident they will bounce back from the London derby mauling by going on another winning run.

“As I said in the dressing room, it’s important we remain together,” said the Chelsea skipper. “We’ll regroup and we’ll go again, for sure.

“We are top of the league and we are there for a reason because we are playing some great stuff and we’ve seen us outplay a lot of sides this year. We’ll kick on and wipe the Tottenham game away.”

He added: “It’s hard to see them [City] claw us back, we were eight points in front and now we’re level on points.

“It’s disappointing to have lost that lead, but we said in the dressing room we’ll come together, put a run together and, hopefully, get a lead again.”

Chelsea have a chance to return to winning ways when they take on Championship side Watford in an FA Cup third-round tie at Stamford Bridge on Sunday.

The Blues are red-hot favourites at 1.15 while Watford, managed by former Chelsea midfielder Slavisa Jokanovic, are 12.82 to win.