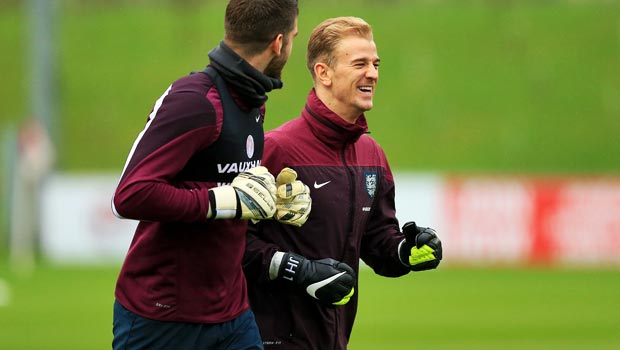 England number one goalkeeper Joe Hart will not travel with the squad to face Scotland in the Tuesday’s friendly at Celtic Park.

The Manchester City stopper played the full 90 minutes in England’s 3-1 victory over Slovenia on Saturday evening to help the Three Lions to their fourth straight victory in Group E of their Euro 2016 qualifying campaign.

It was a reasonably quiet evening for the 27-year-old, who could do nothing about the goal he conceded when midfielder Jordan Henderson inadvertently headed the ball past the former Shrewsbury man to give the visitors an initial lead at Wembley.

Despite this lack of action, England manager Roy Hodgson has confirmed that the 48-time capped keeper will be rested for the trip north of the border, with either Fraser Forster or Ben Foster replacing him for Tuesday’s friendly.

Hodgson said: “Joe Hart will be rested because I have still got the other two goalkeepers and they will come with us up to Scotland and one of those will play – Joe will go home.”

Hart has re-established himself as number one for both club and country after both positions had come under threat following a number of high-profile errors, however his national team boss felt that his understudies were not ready to replace him at that time.

He said: “When Joe was under his severest criticism, Ben and Fraser weren’t at the level of form they are now.”

The boss does, however, feel the Southampton and West Brom number ones are now both in a strong enough vein of form to challenge for the number one spot at international level.

Whichever one of the two shot stoppers gets the nod will come into a team who are slight favourites to win the 112th match between the old rivals, with England at 2.13 to secure victory at Celtic Park.